Plan opposed by an Taisce, Kilkenny Group and Department of Culture 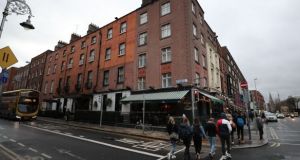 A Larry Goodman family backed company has appealed to An Bord Pleanála the refusal to allow the company demolish a group of historic buildings in Dublin city centre to make way for an office development.

The plan provoked strong opposition from An Taisce, the Kilkenny Group and others, with the Department of Culture and Heritage telling the council that the proposal “represents a significant and adverse loss of built heritage and a detrimental change in this quarter which the department cannot support”.

In a comprehensive refusal, the city council ruled that the proposal “would give rise to the loss of the original historic fabric and urban grain and have a seriously adverse impact on the remaining historic streetscape of Kildare Street and Nassau Street”.

The council also said that the proposal “would seriously injure the settings of the adjoining protected structures and, as a consequence, set an unwanted precedent for similar type development and would be incompatible with the established character of the subject site and the local area”.

It ruled that the proposal “would seriously injure the architectural character and setting of the adjoining protected structures and the wider historic cityscape”.

The council refused planning permission after its planning and conservation officers recommended refusal.

The conservation officer’s report said that “irrespective of their unprotected status, the applicant has not justified on any basis the proposed demolition of Nos 47–49 Kildare Street and No 1 Nassau Street, which have until recently functioned as a hotel”.

The planner’s report concluded that “the demolition of what is obviously a historic and intrinsically Georgian cluster of properties at this prominent location, is considered to be unwarranted.

“The loss of this traditional and historic collection of buildings would be regrettable and irreversible, ” the report added.

The council’s decision followed the Department of Culture and Heritage stating that it “strongly recommends a rethink of the proposed development in this case”.

In a five-page objection, the department said that it was concerned that “the proposed use for this building will significantly undermine its cultural heritage significance in the city”.

In planning documentation lodged with the application scheme architects, Henry J Lyons, told the city council that the development sought to sensitively introduce a contemporary commercial building into the historic streetscape of Kildare Street while protecting the fabric of the protected structure at No 2 Nassau Street.

The board now has four months in which to decide on the case and will invite observations on the appeal that has yet to be circulated to the parties involved.