Budget watchdog and officials at odds over corporation tax 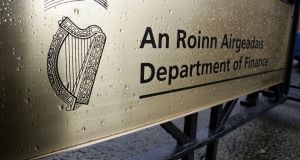 The Department of Finance accused the Irish Fiscal Advisory Council of misrepresenting the main findings of a report on Ireland’s corporation tax take.

The Department of Finance accused the Irish Fiscal Advisory Council (Ifac) of misrepresenting the main findings of a paper on Ireland’s corporation tax take.

A sharp exchange of emails last November took place surrounding publication of the council’s Fiscal Assessment Report, a key part of Ireland’s budget process each year. The argument related to the interpretation of research by two senior economists from the Department of Finance on corporation tax and how it can be modelled.

The department’s fiscal analysis unit said the budget watchdog’s report “misrepresents the main findings of the paper”. It said it was “highly selective” to reference the department’s paper in the way it had been in the Fiscal Assessment Report.

“That may be your opinion or someone else in the department,” he wrote, “I disagree with it. Moreover, I checked that specific wording and representation of the findings with the author in advance and they did not indicate any disagreement with it,” he wrote.

The department responded, saying that was not its understanding of what had happened. Indicating that the parties would have to agree to disagree, the department said: “For the record, we would also refute the suggestion that one of the authors ‘did not indicate any disagreement with it’.”

In response, Mr Casey said that while he was “happy to disagree” the department was “clearly in the wrong here”. He said he had quoted the sentence over the phone with an author of the paper and outlined his interpretation.

“No issues were raised,” wrote Mr Casey, “you weren’t on the call and you aren’t an author of the paper.”

Asked about the disagreement, Mr Casey said the issue was around the “interpretation of economic models” which he said could be “read in different ways”.

He said: “Much of the model’s ability to explain corporation tax in a given year is the result of knowing the out-turn of the previous year and the forecasting success would be much lower for longer forecast horizons.”

In a statement, the Department of Finance said: “It is not unusual for disagreements of this type of arise. To clarify and resolve the matter, an official within the department rang the fiscal council and discussed some of the technical aspects within the modelling paper.”