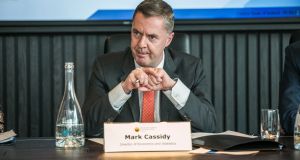 Mark Cassidy, director of economics and statistics at the Central Bank, argued that the new government should also bid to cut the €230 billion national debt. Photograph: James Forde

Any new government should avoid spending at a rate that would overheat the Republic’s economy which is already running at full tilt, the State’s financial watchdog has warned.

The Central Bank of Ireland, which is responsible for safeguarding the financial system, publishes a quarterly bulletin on Wednesday showing unemployment will fall below 5 per cent as the economy continues growing this year.

Speaking before the bulletin’s publication, Mark Cassidy, the bank’s director of economics and statistics, said the State’s economy was running almost at full capacity, and any incoming government should avoid spending at a rate that would overheat it.

“At a time when the economy is growing strongly, a stable policy that does not add to demand should be maintained,” he said.

Mr Cassidy argued that the new government should also bid to cut the €230 billion national debt, which he said “was too high”.

He added that governments themselves decided how to achieve those aims, and that the Central Bank did not comment on elections.

That expansion will slow next year to around 4.2 per cent as there will be less scope for growth, said Mr Cassidy.

Unemployment will remain around 4.7 per cent, down from 5 per cent last year. Depending on the outcome of trade talks, Brexit could also slow growth further.

The Central Bank estimates that 26,000 new homes will be built this year, possibly rising to 30,000 in 2021. Economists believe the State needs to complete 34,000 houses a year for the next decade to bridge the gap between demand and supply.

Figures show that multinational drug-makers such as Bristol Myers Squibb and Pfizer, along with hi-tech companies such as Apple and Google, played disproportionate roles in growing exports to €446 billion last year.