Is our desire to own our own home about to falter?

Chris Johns: Property is king but its primacy is a recent phenomenon 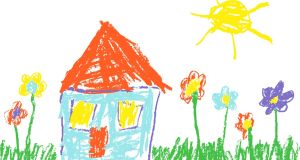 Would today’s generation of house buyers be quite so keen on the hassle of ownership if they thought that prices are destined not to rise for at least a generation?

Once upon a time owner-occupied housing was unusual. There were lots of reasons for this, not least an often expressed view that owning your own home wasn’t worth the hassle or cost of maintenance.

A bigger reason, of course, was that there were a lot of would-be owners who were denied the chance of living in their own homes by a lack of credit. In the UK and Ireland (and elsewhere) renting was once the norm.

All of this changed over the course of the last century. As average incomes improved and we became able to borrow against those incomes, the “dream” of ownership became reality for many. Access to credit, something once denied to many, is a big part of all housing stories.

The exponential growth in owner occupation has been accompanied by many explanations, the most half-baked of which is, in my view, that owning satisfies a deep-seated desire for security.

Ownership has acquired a mythical status with all sorts of psychobabble theories about why we tie ourselves up in knots, not least financial ones, in order to get on the housing ladder.

The role played by government, by policy, has been central to the housing drama (I would say tragedy). A lot of that rental housing used to be supplied by the State. The withdrawal by governments from large swathes of the housing market accompanied the rise of ownership. Which was cause, which was effect?

Could causation have run in both directions? At the very least, it seems likely that if local and national governments had remained fully engaged with social housing, less of us would be as obsessed by ownership.

Our housing choices are driven by many factors. But the role played by rising prices has undoubtedly played a big part in imparting mystical status to owning property.

Young adults committing themselves to multi-decade debt repayment schedules would not subsequently have felt quite so good about those earlier choices if prices had not risen.

Obviously, the rise in demand for property prompted at least part of the rise in prices. Credit availability (demand) often runs ahead of construction (supply). The ever-present mystery of supply never quite rising, even with a long lag, to meet demand can in part be explained by weaknesses in the planning regime as well as structural flaws in the way in which construction firms are incentivised, regulated and taxed.

But we need to remind ourselves that it wasn’t always like this: there have been long periods of history when house prices were flat or falling. Supply and demand can be in balance: it is not pre-ordained that prices must rise for ever.

Over the past four decades, something happened that will never recur, at least in the lifetime of most, if not all, of us. Bond yields fell from high levels to next to nothing. This has affected everything, including all financial asset prices, particularly property.

Credit availability has improved and its cost has collapsed. Those falling bond yields may seem an esoteric and not terribly interesting part of the financial news but they have had a massive impact on all of us. House prices have risen for many reasons but those lower bond yields are near the top of the list of suspects. They can’t fall over the next 40 years in the way that they did. They can’t, in any meaningful way, fall at all.

The role of credit in fuelling housing bubbles is now well understood. It’s why, for instance, the Central Bank of Ireland keeps its foot firmly on the necks of banks in a way that it never did before. It seems unlikely that credit, both in terms of its availability and cost, will ever become as friendly towards house prices again.

More generally, policy makers recognise that the cost of housing is a big driver of the populist wave. Inequality is caused by many things, all of which need to be tackled. But the biggest problem facing many people, particularly those most affected by inequality, is housing. Sort that out and one of the biggest inequalities is also sorted.

Governments know this: the political incentives for sorting out house prices are obvious. True, dumb policies are the response: politicians act to boost demand rather than supply. But some learning is also evident.

Interesting things are happening to house prices. They are falling in parts of Canada, Australia, the UK, Ireland and elsewhere. We can’t forecast anything, let alone house prices, but it seems to me that the stars are once again aligning for something to happen that nobody expects.

Ownership is falling out of fashion. Our appetite for “stuff” might seem superficially insatiable but the phrase “peak stuff” is being muttered. Maybe that’s one response to the environmental crisis. Maybe it’s just technology freeing up constraints on renting things such as cars.

The desire to own your own home may well have a deep-rooted psychological explanation. But that desire is more recent than many people realise. Arguably, it is a fashion, a fad, rather than something deeper.

Would today’s generation of house buyers be quite so keen on the hassle of ownership if they thought that prices are destined not to rise for, well, at least a generation?