The new Labour politics is having no politics. And yet the Tories can still spook voters with the idea of the Corbyn bogeyman 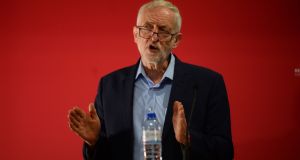 Labour leader Jeremy Corbyn: he has failed to capitalise on the internal Tory knife-fight going on beside him. Photograph: O’Connor/PA Wire

There was a time when the Tories would decry, as a mortal threat to the state, the prospect of a left-winger like Jeremy Corbyn getting into power. Business would flee, they would say, there’d be a run on the pound, the union would disintegrate as the looney left ceded power to “the regions”, what integrationists in London call Scotland, Wales and Northern Ireland.

Something of an irony, then, that most of these unconscionable scenarios – from the collapse in business confidence to sterling’s decline and Scotland’s likely exit after Brexit – play out courtesy of a bunch of 40 or so Tory brigands, whose brand of British exceptionalism would be better hived off into a European-style anti-immigration party. The old social-democratic-Christian-democratic axis, or at least the UK’s version of it, still pertains, however. A product of the UK’s first-past-the-post electoral system.

And what’s left for Corbyn to do if he manages to get in? Reverse Brexit? Re-nationalise the railways? How would these policies sit with the Brexit-weary populous? Re-nationalising the railways is supported by almost two-thirds of Britons, according to a recent survey.

Corbyn’s 2017 election manifesto, steeped as it is in the idea of doing politics differently without actually spelling out what he would do differently, could bedeck any centrist manifesto from Macron’s in France to Obama’s in the US. The new politics is having no politics. And yet the Tories can still spook voters with the idea of the Corbyn bogeyman.

Yes, he’s been mind-numbingly awful on Brexit; has seemingly limped from one internal party crisis to the next, and, perhaps worst of all, has failed to capitalise on the internal Tory knife-fight going on beside him.

A view in some quarters is that a Tony Blair 2.0, aka David Miliband, with a clear cut Brexit policy would clobber the Tories and allow Labour a magnificent return to Number 10. Maybe so, but for now it’s the Tories delivering the left-wing Armageddon, not the looney left.