Only the emergence of proper leadership can avert Brexit fiasco 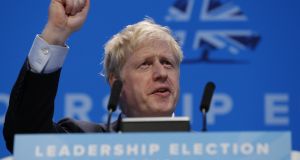 Boris Johnson acts as if the greatest insight to be drawn is the one explained in Bohemian Rhapsody: ‘nothing really matters’. Nothing but himself, of course. Photograph: Darren Staples/Bloomberg

Late-night holiday conversations have never taken on a more dystopian tone. I thought the wine-fuelled Brexit rows of the past three years were bad, but nothing prepared me for the first question I was asked on my regular sojourn in France.

Given my background, I am often asked what I think will happen next, whether that’s about the economy, the political issue of the day or, most usually, a mixture of the two. I have developed a standard speech, occasionally rehearsed in this column, about how inherently unforecastable the future really is.

My (English) interrogator opened with: “This is all going to end in a war, isn’t it?”

The mere asking of the question was, of course, a shock. Anyone wondering why people of a certain disposition are asking this should look at the first couple of episodes of a recent BBC series, Years and Years. These capture brilliantly the current mood of middle class, politically centrist (left and right) Britons. Brexit, climate apocalypse and the unwinnable race to the bottom of British politics has left many people feeling hopeless, helpless and frightened.

To this day, historians argue over the causes of the first World War. The most convincing, in this columnist’s view, is to be found in the writings of Max Hastings, probably the best – certainly the most prolific – military historian alive. In his accounting of how the “war to end all wars” started, he rejects the popular thesis that politicians unwittingly led the globe into catastrophe.

Hastings argues: “Posterity has puzzled endlessly over how the leaderships of the world’s greatest powers, mostly composed of men no more stupid or wicked than their modern counterparts, could ... have allowed the war to happen....It seems mistaken to brand the[m] ... as sleepwalkers, because that suggests unconsciousness of their own actions. It is more appropriate to call them deniers, who preferred to persist with supremely dangerous policies and strategies rather than accept the consequences of admitting the prospective implausibility, and retrospective failure, of these.”

The historian is getting at something important here, the psychology of denial and the associated political imperative of never admitting a mistake. The contemporary resonance with the looming catastrophe of a no-deal Brexit is obvious.

Not as disastrous as war, thankfully, but there are sabres being rattled elsewhere, not least by Donald Trump who, for now, does seem to be conscious enough of the consequences of his actions. Europe’s own history is dominated by one thing: war. Now, the institutions put in place to save us from our nature are under attack like never before.

Leadership, whether of a business or a country, is easy when the weather is fair. Any proper skipper of a boat will know that sailing under good conditions is straightforward: what counts is knowing what to do when a storm threatens or suddenly happens. Reducing sail and changing course are the correct actions, even if the weather forecast turns out to have been too gloomy.

Refusing to act, to change your mind, is the human tendency: sticking to your guns is often admired until it becomes obvious that you were disastrously wrong.

Even then, like many of those 1914 generals and politicians, most will continue to believe they were right and refuse to take responsibility for what happens next. Very few bankers have admitted to grievous error of judgement. Virtually none has formally been found guilty of doing anything wrong. And so on.

The psychopathology of Brexit is beginning to be explored. A superb recent Financial Times piece by Simon Kuper examines the Oxford-Etonian nexus at the heart the current Conservative Party and reveals a group of men formed by class, school, juvenile debating tactics and a desire to win against their fellow schoolboys at the expense of the rest of us. They know exactly what they are doing but the last thing that will ever involve is a change of mind.

The likely next British prime minister is a superficially educated classicist who seems to have taken all the wrong lessons of Socrates, who gave us aporia, the notion that everything is uncertain. Believing in nothing at all, except perhaps the game, Boris Johnson acts as if the greatest insight to be drawn is the one explained by Freddy Mercury in Bohemian Rhapsody: “nothing really matters”. Nothing but himself, of course.

The politician at the centre of Years and Years is a grotesque amalgam of all the usual suspects currently on stage across the world. Winding people up to become more and more frightened – of immigrants, the media, the government and much else besides – the fictional politician scares people to death and then, straight from the populist playbook, promises to cure all ills. The new prime minister is revealed to be funded by dodgy money and to be nothing more than an old-fashioned kleptocratic monster. That she is both exposed and imprisoned (but maybe not) is where the narrative, we fear, becomes wholly implausible.

Nothing, of course, is certain. Only the emergence of proper leadership can avert what now seems possible. We have a weather forecast that looks grim: but it’s just a forecast. Pursuing that sailing analogy, the best advice to any leader watching from the sidelines is to batten down the hatches. Hoping for the best, not doing anything very much, looks to be both natural and wrong.