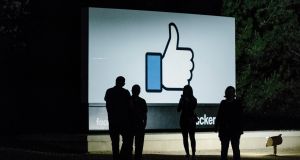 Facebook’s foray into banking via the creation of a crypto currency could be the last throw of the disruptive dice: there are few profit streams left for tech to usurp. File photograph: The New York Times

Facebook’s $5 billion (€4.4 billion) fine from the US regulator sounds like a lot but will barely dent its quarterly cash flow, let alone its annual profit.

It had previously indicated it was setting aside $3 billion in anticipation of a slap on the wrists for data privacy issues. An extra couple of billion is neither here nor there.

Facebook will generate roughly $70 billion in revenues this year and has a $45 billion cash pile. Since the Federal Trade Commission announced its investigation the company’s share price has increased by about a half. And it rose after the details of the fine were revealed. The stock market’s verdict speaks volumes.

Taxation is the real regulatory story rather than fines but both speak to the problem of dealing with modern monopoly-like companies. In the good old days profitability would be the key metric that would prompt government action: once profits reached a level that had a whiff of monopoly-type practices, regulators would step in. Forced break-ups, asset sales and bans on acquisitions were the staple tools deployed. Not so much these days.

Most tech companies claim, with some justification, that they operate in highly competitive industries. Given that a lot of the services they provide are either free or very low cost, there is none of that old fashioned customer gouging that used to drive anti-monopoly legislation.

We know that many tech companies make their money via use of data that we, the consumer, give them for free. There is also some evidence that, for the most part, we don’t care about this. If we ever decide to charge tech companies for our data then those companies will go the way of Europe’s investment banks.

It is possible that some tech companies are “natural monopolies”. They need to be big to reap the economies of scale that arise from massive networking effects. Even if that argument holds water, it is not a defence against the charge that they should pay more tax.

The ongoing efforts to raise the tax yield from the likes of Facebook, Amazon and the rest – the UK and France being the latest countries this week to announce another tax heave – reveal only the complexities involved and the ability of these businesses to run ahead of national government’s feeble (and very different) attempts to milk them.

Most of the rise in stock markets – particularly in the US – this year is attributable to an astonishingly small number of, mostly, technology related businesses. We are not at the heady levels of stretched valuations reached during the bubble of the late 1990s but some analysts are muttering about an unsustainable boom.

One difference between then and now, up to a point at least, is related to those profits: there is much more real money being generated now. So the question naturally arises: how sustainable are those profits? The answer lies in part in the hands of regulators and whether or not they can get their act together on taxation.

Eventually, those profits will come down. If that sounds like a forecast it comes hedged with the observation that while we can be sure this will happen we have no idea when. It will probably require, at least, a Democratic US president, one more willing to put taxes up and co-operate with other countries. All of this seems a long way off but 2020 is an election year in the US.

Things can change, often in unexpected ways. Deutsche Bank’s announcement in recent days of a retreat from investment banking marks the way in which many similar businesses have fallen. Not too long ago, Deutsche targeted a return on equity (a key measure of profitability) of 25 per cent.

As with tech companies, such a level of cash generation was highly suggestive of something odd. In that particular case it wasn’t so much monopoly power but a willingness to take massive risks with shareholder funds. Super-normal profits were, for a while, made and believed to be sustainable. The financial crisis put paid to all that. The new return target, about which the market is somewhat sceptical, is 8 per cent by 2022.

With hindsight we can see how unsustainable were Deutsche’s profit ambitions. We can make similar observations about tech profits but, ex ante at least, cannot identify a probable catalyst for the drop. Tech profits are a mix of new revenue streams from data and old fashioned destruction of the competition – the Amazon effect, for example, on high street retailers.

We can forecast that tech will be hoist by its own petard and new entrants will be similarly disruptive of excess profits. Or, by contrast, we can observe how Facebook, for instance, clearly thinks that banking profits, such as they are, are ripe for the taking.

Facebook’s foray into banking via the creation of a crypto currency could be the last throw of the disruptive dice: there are few profit streams left for tech to usurp. In this regard we could ask if there is a fascinating symmetry between tech’s rise and banking’s fall? And will tech go the way of Europe’s investment banks?

Ireland is like the tech company shareholder: enjoying the ride. But we should prepare for the time when governments and consumers demand their money back.