Irish unemployment rises ahead of election 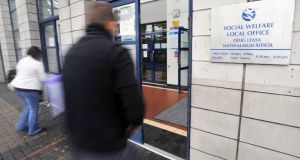 The latest figures show the seasonally adjusted number of people classified as unemployed in January was 120,200, up 3,300 or 0.1% on the previous month

Unemployment has unexpectedly risen amid signs that companies may be more cautious about hiring.

Central Statistics Office (CSO) figures put the headline rate at 4.8 per cent for January, up from 4.7 per cent in December. However experts said the labour market remained “in good health” and that unemployment was likely to remain on a downward trend in the coming months.

The latest figures show the seasonally adjusted number of people classified as unemployed in January was 120,200, up 3,300 or 0.1 per cent on the previous month.

The 4.8 per cent rate is also nearly three percentage points lower than the euro zone average of 7.4 per cent.

The latest figures suggested the youth unemployment rate here rose from 11.1 per cent to 11.8 per cent between December and January.

“The labour market continues to be in good health even with the slight increase in the unemployment rate this month, perhaps due to continuing concerns about the kind of Brexit that will be delivered,” said Pawel Adrjan, economist at recruitment website Indeed.

“Forecasters predict that the unemployment rate will return to its declining trend through 2020, potentially falling as low as 4.4 per cent,” he said. “Given that just eight years ago the unemployment rate was 16 per cent and the economy in crisis, it is surprising the extent to which its performance is playing such a small role in the ongoing general election campaign.

“Polling shows that the economy is the most influential factor in deciding voting intentions for only 8 per cent of people,” he said.

“What is clear is that to meet the demands there are for more workers any new government is going to need to look to policies that will help bring down the barriers that are preventing certain demographic groups from benefiting from the growing economy and employment opportunities.”

On the rising level of youth unemployment, analyst Alan McQuaid said: “There is clearly a problem about the number of jobs available for school leavers and new graduates from college.

“For a start, there should be more encouragement in second-level for students to take apprenticeships and away from the overcrowded university system. Then there is the question of experience. How can you gain experience if no one is willing to give you that experience in the first place?”

1 Bank leaked my loan request to family who tried to rip me off
2 Ryanair and Aer Lingus monitor impact of conronavirus on travel to Italy
3 Boris Johnson's new immigration regime will damage much more than industry
4 Mastercard to create 1,200 new jobs by expanding base in Dublin
5 Varadkar resigns amid warning impasse will hit the economy
6 Google completes purchase of Treasury Building for €120m
7 Garda mobile contract win causes concern over Eir’s use of Huawei kit
8 Billionaire Zara founder and German funds vie for prime Dublin offices
9 Exposed to coronavirus: How Irish business is coping with fallout
10 Knock gets visit from world’s largest passenger plane
Real news has value SUBSCRIBE