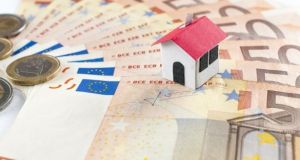 The wealthiest 10 per cent of households have net wealth greater than €835,000, the CSO survey found.

Irish households are 80 per cent wealthier than they were at the low point of the recession, on paper at least, according to new figures from the Central Statistics Office (CSO).

But the numbers also show home ownership rates are continuing to decline.

The CSO found the median or typical net wealth of Irish households in 2018 was €184,900. This was 80.2 per cent higher than the €102,600 recorded in 2013, thanks in the main to rising property values, which boost the wealth of households that own their own home.

The figures, contained in the CSO’s latest Household Finance and Consumption Survey highlight a stark disparity between rich and poor households in the Republic, however. The wealthiest 10 per cent of households were found to have a net wealth greater than €835,000 while the bottom 10 per cent had a net wealth of less than €1,000.

Falling home ownership rates has become a major election issue, with Opposition parties promising to halt the decline if elected.

The survey also found that wealth in the Irish society is “more concentrated” in the eastern and midlands region, with a median net wealth of €212,700, compared with €189,700 in the southern region and €146,900 in the northern and western region.

A third of households (32.7 per cent) reported that they had received an inheritance or a substantial gift at some time in the past. However, this varied depending on how wealthy a household was.

The figures also showed that more than half (51.5 per cent) of all households have some form of debt, including mortgages, loans, credit cards and overdrafts. That is down from 56.8 per cent in 2013.

“While it great to see that the vast majority of people are out of negative equity, tens of thousands of standard variable-rate mortgage holders are significantly overpaying on their mortgage but are still reluctant to switch to lower rates, which in many cases is keeping rates high for a large number of existing mortgage-holders,” said Trevor Grant of the Association of Irish Mortgage Advisers.

“The volume of mortgage switching remains at one quarter of what it was at the peak of the boom, and that the vast majority of the 150,000-200,000 mortgage-holders in Ireland on standard variable rates are overpaying by hundreds, if not thousands of euro each year,” he said.