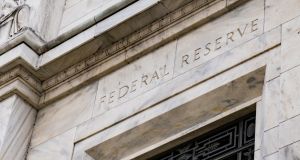 Facade on the Federal Reserve Building in Washington DC

The Federal Reserve kept its key interest rate unchanged and continued to signal policy would stay on hold for the time being, while stressing the importance of lifting inflation to officials’ target.

The central bank also made a technical adjustment to the rate it pays on reserve balances and said it would extend at least through April a programme aimed at smoothing volatility in money markets.

“We believe monetary policy is well positioned to serve the American people by supporting continued economic growth,” Chairman Jerome Powell told a press conference Wednesday in Washington. Officials kept the target range of the benchmark federal funds rate at 1.5 per cent to 1.75 per cent and called that stance “appropriate to support sustained expansion of economic activity.”

US stocks erased gains while yields on the 10-year Treasury note declined and the dollar fluctuated. Traders extended bets the Fed would cut rates toward the end of this year.

“The Fed has made it clear that the barriers to move in either direction are quite high,” said said Daniel Ahn, the chief US economist at BNP Paribas. “But we believe the wall for a cut is lower than the wall for a hike.” He detected a “dovish tilt” in Powell’s efforts to stress the Fed was uncomfortable with inflation running persistently too low.

Policy makers changed their statement to say that the current stance of monetary policy is appropriate to support “inflation returning to the committee’s symmetric 2 per cent objective.” Previously they had said policy was supporting inflation “near” the goal.

Powell explained in his press conference that the change was made to send “a clearer signal” that the committee was not comfortable with inflation running persistently below target. “We wanted to underscore our commitment to 2% not being a ceiling,” he said.

Their preferred gauge of price pressures -- the personal consumption expenditures price index -- rose 1.5 per cent for the 12 months ending in November. Powell said inflation was expected to move closer to 2% over the next few months thanks to so-called base effects, “as unusually low readings from early 2019 drop out of the calculation.”

Officials made some changes even while keeping their benchmark interest rate steady. They approved a 5 basis-point increase on the rate they pay on excess reserves to 1.6 per cent – a technical adjustment designed to keep the main funds rate within its designated range.

The Fed raised its overnight reverse repurchase rate by the same amount to 1.5 per cent, and extended term and overnight repos at least through April. The central bank had earlier signaled such measures were possible.

It downgraded its assessment of household spending to say it has been rising at a “moderate” pace, instead of its earlier characterisation of the rate as being “strong.”

The committee repeated that economic activity has been rising at a “moderate” rate, with “strong labour market conditions”.

Officials gathered with financial markets on edge as a deadly virus in China weighs on its economy and could threaten global growth. Policy makers also endured another attack from President Donald Trump, facing re-election in November, who reiterated in a tweet Tuesday his latest call for the Fed to cut rates.

The FOMC decision was the panel’s second-straight unanimous vote.

Following three cuts in 2019, US central bankers have said their policy is supporting the country’s record expansion despite headwinds from trade and geopolitical uncertainty.

Nonfarm payroll growth averaged 176,000 a month last year, while the unemployment rate held below 4 per cent for most of the year.

Data since the December FOMC meeting have shown the housing market has held up, fueled in part by last year’s rate cuts. Consumers also remain upbeat about their prospects, surveys have shown.

Manufacturing, however, has showed scant improvement, consistent with a downshift in investment and sluggish markets for exports.

Business investment could be further dented by Boeing’s suspension of 737 Max production starting in January. The plane maker received just three commercial aircraft orders in December, down from 63 the prior month, and doesn’t expect regulators to clear the grounded Max to resume flying until mid-2020. – Bloomberg