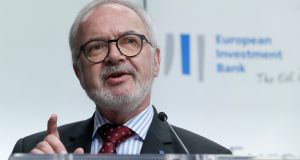 EIB president Werner Hoyer: “Climate is in everything we do.” Photograph: EPA

Half of all lending by the European Investment Bank (EIB) will go to projects related to climate and sustainability by 2025, it said on Thursday.

Echoing the European Commission’s Green Deal commitments, Mr Hoyer said all programmes the bank supports must be “Paris”-compliant. “Climate is in everything we do,” he said. The bank aims to support – through loans, investment and leveraging – €1 trillion of climate action and environmentally sustainable investment in the next decade.

The EIB is the EU’s long-term investment arm, owned by the member states. Together with its subsidiary fund, the bank provided financing of €72 billion last year, supporting investment of up to €280 billion. This came as the bank borrowed €50 billion, it said on Thursday.

The Republic received some €1.84 billion in 2019, some 0.3 per cent of GDP. Leveraged, related investments totalled some €6.8 billion.

In its investment survey, the EIB reports that Ireland has recorded the highest level of gross fixed capital formation (+58 per cent in real terms) in the decade to the fourth quarter of 2018. It is also an outlier in terms of being the third most dependent on internal sources for investment funding, and is the member state most happy to rely on such funding.

Irish businesses say the main inhibitor of investment is uncertainty.

Mr Hoyer said the bank’s activities had been severely inhibited during the first part of 2019 because of uncertainty over Brexit but the bank recovered to more than meet its target for new investments, signing a record number of 1,095 operations.

The willingness of the 27 remaining member states to step in to meet the €16 billion in capital guarantees that the UK was stepping back from ensured that the bank did not have to cut its lending by some €40 billion, Mr Hoyer said.

In an implicit appeal to member states to back an expanded EU budget, Mr Hoyer made clear the bank’s ambitious programme to continue expanding investment could only succeed if it received the wherewithal to do so.

“We are great at leveraging but there must be something we can leverage.”

The EIB in 2019 was leveraging 2.88 times its investment and Mr Hoyer expects to be able to raise that ratio.

The bank expects to have assisted some 386,600 SMEs in the course of 2019, sustaining 4.4 million jobs. Some 7.4 million households were assisted with power supplies, 10 million with water, and 11 million with improved sanitation.

The bank is continuing to invest heavily in Africa – €22 billion in the last decade – and in other non-European locations. Mr Hoyer said projects such as reforestation in Latin America deliver better returns than those available in Europe.

He said that the bank would not be supporting projects which were simply a shift from one form of carbon-based energy to another. A number of eastern member states are proposing to switch from dependence on coal production and use to natural gas.

1 Majority of employees don’t want to return to pre-Covid working patterns
2 The $6bn judgment pitting Nigeria against Irish businessmen
3 Almost 600 social and affordable houses given green light in Dublin
4 Homeworking is depriving me of juicy gossip
5 If tourists are such pariahs should we not be testing them on arrival?
6 ‘My rent here is so low it’s a joke’
7 Primark rejects £30m bonus for bringing back staff
8 Tobacco giant’s menthol-ban substitutes take 5% share of Irish market
9 Investors in Irish solar energy fund in line for €20m payout
10 ‘I set up an investment club many years ago with a bunch of friends’
Real news has value SUBSCRIBE