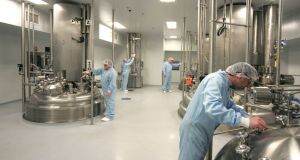 Exports of medical and pharmaceutical products rose by 12 per cent to €5 billion.

Irish exports surged again in August as demand for medicines and other pharmaceutical products connected with the pandemic rose.

The latest trade figures show the value of goods exports increased by €847 million or 6 per cent to €14 billion in August.

The increase was driven by exports of medical and pharmaceutical products, which rose by 12 per cent to €5 billion. Exports of organic chemicals jumped by nearly 60 per cent to €2.4 billion.

Ireland is a global hub for pharma and medtech, playing host to 24 of the top 25 biggest players, including Johnson & Johnson, Roche, Pfizer, Novartis and AbbVie. Pharma and chemical exports account for 40-50 per cent of total Irish goods exports, worth over €70 billion a year.

These companies have been ramping up production to meet soaring demand for products connected with the treatment of Covid-19.

The figures show imports of other transport equipment, including aircraft, decreased by €664 million (63 per cent) to €386 million in August compared with August 2019.

In contrast to pharma, aircraft leasing is in the eye of the storm, with airline fleets across the world grounded while authorities try to contain the virus.

The US was the single largest export destination, accounting for €4.3 billion or 33 per cent of total exports in August.

1 Hurrah for the companies giving staff more time off
2 RTÉ to seek 70 voluntary redundancies as ‘large costs’ beckon in 2021
3 Some Irish money market funds came close to danger in March
4 Covid-19 will worsen shortage of accountants, says CPA Ireland
5 ‘We lost money on our planned wedding in Spain. Covid saw to that’
6 Start-up Loanitt raises €570,000 as it looks to double headcount
7 Sustainable investment: How your pension can help tackle climate change
8 How to make the hybrid workforce model work
9 No-deal Brexit could trigger rise in food prices, says Simon Coveney
10 How long can Government afford to keep State pension age at 66?
Real news has value SUBSCRIBE