Bus and rail on track for €1bn budget boost 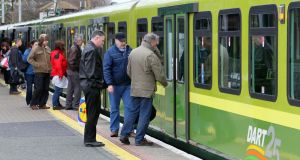 Budget to provide for 41 new inter-city rail carriages and up to 600 carriages earmarked for the extension of Dublin’s Dart light rail service.

Bus and rail services are on track for a Budget 2021 €1 billion spending boost, according to Minister for Public Expenditure and Reform Michael McGrath.

The Minister pledged €1 billion to bus and rail projects in his budget speech on Tuesday.

“This allocation will enable progress on major Ireland 2040 projects, including Bus Connects, Metrolink and the Dart expansion programme,” Mr McGrath said. He added that the allocation would help “enhance” local bus and rail services around the Republic.

“That will ensure the continuation of services even with reduced capacity restrictions due to Covid-19,” the Minister said. He noted that greenway projects would also get a share of the funds.

Overall, the Department of Transport will get €3.5 billion in 2021, a €1 billion increase on this year.

Cork and Shannon airports will receive €10 million in total to help them tackle challenges posed by the pandemic, which has drastically cut passenger traffic through both.

State airports company DAA welcomed news that Cork would receive aid. A spokesman predicted that the airport would lose €20 million this year.

“Prior to this funding announcement, Cork was the only regional airport in the State that had not received direct exchequer funding,” said a spokesman.

Minister for Transport Eamon Ryan welcomed news that the department would receive €3.5 billion next year.

“It will ensure that our transport network continues to grow sustainably in to the future,” he said.

His Minister of State colleague, Hildegarde Naughton, confirmed that the department would spend €1.3 billion on maintaining local and national roads, as well as beginning work on a number of long-awaited schemes.

“This investment is essential to delivering local services, supporting economic growth in rural and regional areas as while as driving job creation,” she added.

Ms Naughton announced that Donegal, Kerry and Knock airports would receive €21.3 million from the State in 2021. They will use the funding to support public service routes from Dublin to Donegal and Kerry, as well as spending on extending their facilities.

Combined with the €10 million allocated to Cork and Shannon, regional airports will get a total of €31.3 million from the Government next year.

Earlier, Mr McGrath told the Dáil that a Government pledge to spend €600 million more than originally promised on infrastructure next year would bring its target past a total of €10 billion for the first time. He said the money would include provision for new road projects in Cork, Donegal, Mayo and Wexford. It will also pay for 41 new inter-city rail carriages and potentially up to 600 carriages earmarked for the extension of Dublin’s Dart light-rail service, for which a number of multinational companies recently bid.

The roads destined for extra cash include the Dunkettle interchange in Cork, the N56 in Donegal, N5 in May and N4 in Wexford.

The extra €600 million will come on top of the €500 million in the July stimulus package for public building projects in an effort to boost employment.