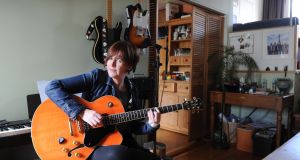 Eleanor McEvoy said the €50 million which has been given to the live music sector marks an “unprecedented” in attitudes to the unfunded sector. Photograph : Aidan Crawley

Singer-songwriter Eleanor McEvoy has said she expects musicians and crew to benefit directly from the €50 million allocated to the live music sector in the budget.

McEvoy, the chair of the Irish Music Rights Organisation (IMRO), maintains the Government had really listened to the sector which has not been able to work since March 12th.

She described the situation that most musicians find themselves in as “absolute frightening and catastrophic” with no end in sight to the ban on live music in Ireland or in most countries where Irish musicians perform.

McEvoy said the €50 million which has been given to the live music sector marks an “unprecedented” in attitudes to the unfunded sector.

Most promoters, venues and artists who are not funded by the Arts Council get no government support.

“In the past there has been an element of people who never get funding, but I think that things are going to change,” she said.

“The wider music and entertainment industry have worked tirelessly and in unison to achieve these lifelines.

“Departments right across government have recognised the great threat to our creative industries. Budget announcements today mean we can look forward with some degree of confidence to the future.”

McEvoy said the allocated money will go first to venues but will filter down to artists by allowing them to perform gigs that would be otherwise uneconomical because of smaller crowds.

She suggested the €8 million given to move the National Symphony Orchestra from RTÉ to the National Concert Hall would end up being paid to musicians.

Steve Wall of The Stunning said the band played its first concert since Christmas in the Róisín Dubh in Galway just before the entire country moved to Level 3.

He hoped the money allocated will allow musicians to play venues again. “We are eager to work and not allowed to. When it gets to next year and you can’t get people into venues, there will have to be a direct payment to musicians and other people in the industry.”

He said many people in the industry will be relieved that the Covid-19 payment has not been reduced further as most musicians are dependent on it at present.

Singer-songwriter Mundy said musicians have many questions about the Covid-19 payment. Should they still receive the payment if they are in receipt of royalties payments? Also many are unsure if they will be able to do occasional concerts without losing the payment.

Paddy Casey said he was relieved that the Government will allow self-employed people to “warehouse” their taxes for another year and that the pandemic unemployment payment is being retained until April next year.

“As a musician, I would love some help. We do pay our taxes, we pay our VAT. We do everything that a normal business is supposed to do. I don’t understand why we don’t get a proper digout,” he said.

“We have sacrificed everything and for the foreseeable future. As a musician, I am not looking for a medal, but people are on the verge of losing their houses.

“My gigs pay for my house and for my music and for anything you do in life. I do alright, but if I lose a couple of gigs that’s a problem for me.”

1 How long can Government afford to keep State pension age at 66?
2 Revenue publishes list of companies tapping State for wage support
3 Developers may need to go back to the drawing board as one-beds fall from favour
4 Halfords sees 700% increase in sales of e-scooters
5 Bake-off soy sauce tweet backfires for UK trade ministry
6 Covid-19 will have a significantly worse impact on UK public finances than on ours
7 Trump vs Biden: Stakes are high for the Irish economy
8 Big Tech results, Niall Horan shares €1.7m, and impact of US election on Irish economy
9 Tighter regulations for car makers will drive buyers to choose electric
10 NatWest CEO declines to give timeline for Ulster Bank decision
Real news has value SUBSCRIBE