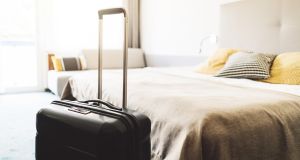 The coalition Government has moved to shore up the beleaguered tourism and hospitality industry by cutting its VAT rate from 13.5 per cent to 9 per cent and giving businesses shuttered by anti-virus restrictions access to a compensation scheme with payouts of up to €5,000 per week.

The tourism and hospitality sector, the part of the economy that has been worst-hit part by the pandemic, will also receive €55 million in extra business supports to be administered by Fáilte Ireland, the State agency with responsibility for the domestic tourism sector.

Businesses operating in the sector will also benefit from an extension to the year end of a waiver of commercial rates, as well as an extension until the end of 2021 of a Government wage subsidy scheme to part-pay the salaries of workers who would otherwise have been let go because of the pandemic. The wage subsidy scheme had been due to expire at the end of next March.

The widely flagged VAT cut will kick in just over two weeks time on November 1st and will run until the end of 2021, at a full-year cost of €336 million. The move reverses a corresponding increase implemented by the last Fine Gael-led administration just two years ago.

Paschal Donohoe, the Minister for Finance, said the early start date of the 14-month VAT cut is to support hospitality businesses that have managed to trade to some degree during the Level 3 restrictions currently in place across the country.

The compensation scheme, the Covid Restrictions Support Scheme (CRSS), is not exclusively aimed at the hospitality sector but its businesses will be prominent among applicants. Starting today, it kicks in whenever and wherever anti-virus restrictions are at Level 3 or above.

To qualify for CRSS, businesses must have a decline in weekly turnover due to the restrictions of at least 80 per cent, compared to the corresponding week of trading for 2019. Businesses compensated under the scheme can claim cash payments of 10 per cent of the first €1m of turnover, and 5 per cent for turnover above this level. The payout for any individual week is capped at €5,000.

Michael McGrath, the Minister for Public Expenditure, said the tourism and hospitality sector is “hugely important” to the economy and has been “hit very hard” by the pandemic, devastated by the effective bar on the arrival of overseas visitors to Ireland.

The tourism industry welcomed the support measures, also some sources expressed frustration that the compensation is not backdated to help businesses, some of whom have been largely prevented from trading for seven months since the pandemic began.

Eoghan O’Mara Walsh, the chief executive of the sector’s umbrella group, the Irish Tourism Industry Confederation, welcomed the VAT cut: “This is an important measure for the Irish tourism and hospitality industry and will benefit many businesses once demand improves.”

The sector also welcomed the extension of the wage subsidy scheme to the end of 2021 but expressed disappointment that the level of supports under the scheme, which were recently tapered, had not been restored to the previous level of up to €410 per week per employee.