Measures include new €5,000 a week scheme for struggling businesses and VAT cut for hospitality 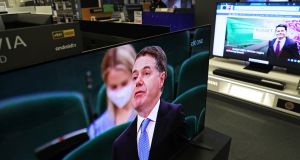 Minister for Finance Paschal Donohoe has unveiled an aggressive package of spending measures in the budget, worth a record €17 billion, in a bid to contain the economic fallout from coronavirus.

They include a new support scheme for businesses impacted by the current Covid-19 restrictions, worth up to €5,000 a week, a reduction in VAT for the hospitality sector and a special €3.4 billion Brexit and Covid-19 contingency fund.

Mr Donohoe also announced that the Government’s Temporary Wage Subsidy Scheme, which is due to end in April next year, would be replaced by a similar scheme running through 2021, and that the Government would apply for EU funding that could cover up to €2.5 billion of the cost.

He said the budget was framed on two assumptions: a no-deal Brexit and the fight against coronavirus continuing in the absence of a widely available vaccine next year.

With tax receipts proving more resilient than previously thought, Mr Donohoe was able to announce a bigger budget spend. He said a deficit of €21.5 billion, or 6.2 per cent of gross domestic product (GDP), was projected for 2020. While he acknowledged this was a “huge figure” in the context of recent budgets, it was similar to what other countries were borrowing. “What is crucial is making sure that any deficit remains a manageable deficit,” he said.

The Minister has pencilled in a deficit of €20.5 billion for next year, which is considerably larger than previously signalled.

Up to €5,000 a week for Covid-hit firms, hospitality VAT rate cut VIEW NOW
Inside Business with Ciaran Hancock · Budget 2021: “unprecedented in size and scale”

A separate Department of Finance report, however, warns that more severe containment measures than assumed in the Government’s current outlook– for instance, another national lockdown – could result in a deficit of the order of €25 billion.

The centrepiece of the new measures was an emergency aid scheme for struggling businesses – the Covid-19 Restrictions Support Scheme (CRSS), which will allow them defray costs of up to €5,000 a week if they can demonstrate an 80 per cent reduction in turnover on last year.

The scheme is effective from now until the end of March next year, applies to sectors impacted by the current Level 3 restrictions, and comes amid criticism that the Government’s existing business supports were untargeted or too arduous to access.

There was also a reduced VAT rate for the hospitality sector from 13.5 per cent to 9 per cent with effect from November 1st until December 2021.

Businesses will also be supported via a waiver on commercial rates for the remainder of 2020.

Mr Donohoe announced a €3.4 billion Brexit and Covid-19 recovery fund to be deployed next year at the discretion of the Government. It is not clear yet what the fund will be used for.

“The unallocated €3.4 billion recovery fund will give us the firepower we need to do more in 2021 to protect jobs if the pandemic continues,” Tánaiste Leo Varadkar said.

As signalled in advance, most of the personal income tax code was left unchanged but the ceiling of the second Universal Social Charge band will be increased from €20,484 to €20,687 to support those on minimum wage.

On the green agenda, carbon tax will be increased by €7.50 per tonne next year, from €26 to €33.50 per tonne, with the funds ringfenced to help those at risk of fuel poverty.

This increase will be applied to auto fuels from tonight and all other fuels from May 1st next year. Mr Donohoe described the move as “another step in our collective efforts to decarbonise our economy”. Legislation will be provided in the Finance Bill to increase the tax each year by €7.50 up to 2029 and by €6.50 euros in 2030 to achieve €100 per tonne.

“We have faced numerous difficulties since independence, but never one like Covid-19; an invisible enemy that has caused great suffering, and disrupted so much of what is central to our wellbeing,” he told fellow TDs.

“Equally, we meet this enemy with greater determination, resolve and resources than ever before in our history.”

1 Developers may need to go back to the drawing board as one-beds fall from favour
2 Bake-off soy sauce tweet backfires for UK trade ministry
3 Covid-19 will have a significantly worse impact on UK public finances than on ours
4 Halfords sees 700% increase in sales of e-scooters
5 How long can Government afford to keep State pension age at 66?
6 Revenue publishes list of companies tapping State for wage support
7 Trump vs Biden: Stakes are high for the Irish economy
8 Will remote working become the norm?
9 Construction quality a priority for Cork-based entrepreneur
10 Liam Neeson among new investors backing €100m Ireland Impact fund
Real news has value SUBSCRIBE