High level of trust in local shopkeepers and recommendations 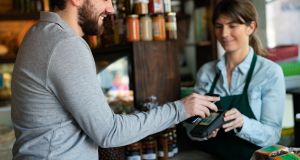 Eighty per cent of Irish consumers are more likely to shop locally compared to a year ago in a bid to help communities bounce back, new research from Mastercard has found.

The study also revealed a high level of trust in local shops, with 78 per cent trusting a recommendation from a local shopkeeper and 75 per cent of Irish shoppers surveyed preferring to buy from a familiar face.

The chief reason for the renewed love of local retailers for almost 60 per cent of respondents was helping communities bounce back from the pandemic. Some 29 per cent said they are shopping locally to form new relationships, while 20 per cent said they trusted recommendations from people in the local community.

Just under 80 per cent said the pandemic had given them a new appreciation for their communities and local shops, as convenience, limits on travel and queues for local supermarkets led to people rediscovering shops nearby.

That renewed interest in the local community has extended to other elements of it, with 64 per cent more likely to say hello to their neighbours than a year ago. Almost half said they will take online deliveries for neighbours, 21 per cent are part of a local WhatsApp group, and more than one in five have a spare key for their next-door neighbour.

“The way we shop has changed, and as well as an increase in online and contactless spending, we have seen a trend of people opting to shop locally. Small businesses are the backbone of our economy and many are rediscovering the huge number of great, varied and unique shops in their local communities and neighbourhoods,” said Sonya Geelon, country manager at Mastercard Ireland.

“It is clear that local retailers have a major role to play in providing goods and services, but they also play an integral and broader role supporting local people and fostering community spirit. The bounce back of the economy starts on our doorstep and local shops and communities play an enormous role in aiding the recovery and return to growth.”