Budget 2021: Economic outlook on a knife edge due to pandemic uncertainties 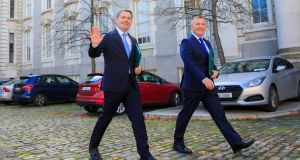 Go big or go home, as the old saying goes. And there is no doubt the Government has decided to go big in terms of spending to combat the massive economic hit of Covid-19.

It has done so knowing that the economic outlook is on a knife-edge. If the virus outlook improves by, say, next spring, the public finances should be able to get through this. An agreed Brexit deal would also help.

However, if severe Covid restrictions were to be reintroduced over a longer period, forecasts included in the budget documents show that more unemployment – and much higher borrowing – will result. A combined deficit of €42 billion in 2020 and 2021 could quickly become €47 billion or more and the momentum of economic recovery would be halted, with unemployment remaining above 14 per cent.

Faced with this huge uncertainty, Minister for Finance Paschal Donohoe and Minister for Public Expenditure and Reform Michael McGrath have aimed for a deficit of spending over revenue of €20.5 billion next year, about €1 billion below last year and at the higher end of expectations.

They thus leaned towards doing more, rather than doing less. There are risks, but the risks of not acting are greater.

Donohoe and McGrath were helped by this year’s tax revenues which have been much stronger than expected. In an analysis of the budget forecasts, Davy stockbrokers said the projection of a 6. 5 per cent increase in tax revenue next year, despite growth of just 1.75 per cent, was a risk to the 2021 projections.

Much of the emergency spending introduced as the crisis hit will continue, while core Government spending will also rise. Spending next year will be €87.8 billion, if all the money in a €3.4 billion recovery fund – much of it not yet allocated – is spent. This would be €1.8 billion ahead of this year’s expected outturn, itself swelled by massive Covid-19 spending.

Facing the extraordinary economic impact of the pandemic, it seemed like the right call. There is real damage now to the fabric of the economy. Spending money now will limit the longer-term damage caused by closed businesses and people slipping into long-term unemployment.

More Government cash being dropped all over the place also helps to replace some of the lost private sector activity. And it is on a remarkable scale, with the budget itself adding an unprecedented €6.5 billion to borrowing.

While the then government had to cut spending and raise taxes in the teeth of the last recession, the current coalition can hike spending massively because it can borrow so cheaply. Massive intervention by the European Central Bank in response to the pandemic has driven rock bottom interest rates even lower.

This does not mean there is no limit on borrowing but it does give significant leeway.

The ECB has promised to continue its emergency programme at least to next June, and the outlook beyond that suggests borrowing costs will remain relatively low.

How this plays out is of vital national interest to Ireland.

The Government’s strategy is to keep Ireland’s deficit level roughly in line with international norms during the crisis phase. But beyond that it will have to fall. You can’t borrow €20 billion every year and our already high national debt is a factor.

While much of the once-off costs of supporting businesses from the pandemic will – we hope – fall away after next year, it is also clear that it has led to a once-off jump in ongoing spending in areas like health and social programmes, much of which will not be reversed. The State is getting bigger.

While the once-off costs of the pandemic can be met via borrowing, these ongoing commitments will have to be paid for. Finding places to raise revenue to pay for this and for all the commitments in the programme for government – including big investments in housing, retrofitting, wind energy and so on – will not be easy.

Donohoe said the Government will push ahead with the establishment of a commission on tax and welfare to examine the issue. It has its work cut out. Significant hikes in PRSI, for employers and possibly employees, seem one likely direction.

Meanwhile, by next spring the Government will outline how it plans to cut the deficit in the years ahead. Tough talking and difficult politics lies ahead here both within the coalition and between it and the opposition.

Combatting the crisis is a massive job and difficult decisions will lie ahead whatever happens.

Addressing the youth unemployment crisis and the wider impact on the younger population is now a central economic challenge. Having announced the biggest budget spending programme in history, the Government now has to deliver on it – and hope that by next year the worst of the pandemic is in the rear-view mirror.