New figures show economy grew 0.9% in the third quarter, according to CSO 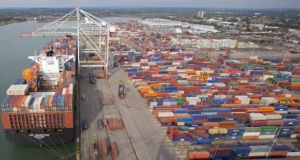 Exports of goods and services increased 1.5 per cent during the quarter

The economy grew by 0.9 per cent in the third quarter and is on target for GDP growth of 7.5 per cent for the year as a whole.

Initial estimates from the Central Statistics Office indicate there was an increase of 4.9 per cent in GDP in the third quarter compared with the same period of 2017.

New figures show the economy grew by 0.9 per cent in the third quarter when compared with the previous three-month period. The growth comes after a 2.5 per cent rise in GDP in the preceding quarter and a 0.4 per cent contraction in the first three months of 2018. Growth in the year to date amounts to 7.4 per cent.

Gross national product (GNP), an alternative measure that strips out the effects of multinational profits, was up 5.2 per cent from the second to the third quarter and is up 3.1 per cent in the year-to-date.

The Minister for Finance Pascal Donohoe said the latest numbers are consistent with the Department of Finance’s projection for 7.5 per cent GDP growth this year.

“While the economic situation remains favourable at present we must remain vigilant,” he said. “The Irish economy faces a number of significant risks, in particular the potential fallout from Brexit, with the probability of a no-deal Brexit having risen of late, as well as increasing trade protectionism and potential overheating as the economy approaches full employment. Careful management of the public finances is needed in order to chart our way forward through the uncertain times ahead.”

Across the larger sectors of the economy, industry grew by 3.5 per cent in volume terms over the third quarter, while information and communications technology increased by 0.1 per cent. Domestically, construction activity rose by 3.5 per cent and the distribution, transport, hotels and restaurants sector grew by 1.1 per cent.

By contrast, the agriculture, forestry and fishing sector recorded a decrease of 1.5 per cent over the same period.

Exports of goods and services increased 1.5 per cent during the quarter while imports increased by 7.1 per cent, driven mainly by increased activity in the aviation leasing sector.

Personal consumption, which accounted for 49 per cent of domestic demand during the period, increased by 1 per cent compared with the previous three months.

Balance of payments, a measure of the Republic’s economic flows with the rest of the world, continued to show a large surplus, at €9.1 billion. The balance for the year-to-date at €28.8 billion was higher than the full-year 2017 balance of €24.9 billion.

Ibec welcomed the latest figures, with its head of tax and fiscal policy Gerard Brady saying the numbers show the economy remains in a solid position, in part due to strong domestic activity.

However, Mr Brady warned that its members are heading into a difficult trading period due to the weakness of sterling and continued Brexit uncertainty.

“We expect that the economy will continue to grow strongly in 2019, however, this growth will be somewhat weaker than recent years as we are now at a mature phase of the business cycle with the economy close to capacity,” he said.

“These forecasts are based off the assumption that an agreement on Brexit is reached. If this does not happen, 2019 will be significantly more challenging,” Mr Brady added.