Ireland is in eye of storm - but opportunities remain

Conference hears that while there will be less flexibility when it comes to setting tax policy, there will still be ‘significant opportunities’ 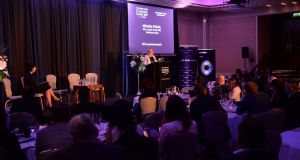 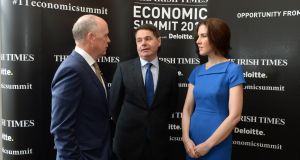 Ireland may be caught “in the eye of a tax storm”, but despite the challenges posed by everything from Brexit, to the OECD’s Beps regime to US President Donald Trump’s tax plan, opportunities are also on the horizon, a conference heard on Tuesday.

Speaking at The Irish Times Economic Summit 2017 in association with Deloitte, ‘Opportunity from Uncertainty’ at The Shelbourne Hotel, Dublin, Lorraine Griffin, head of tax with Deloitte, said that while Ireland will have “less flexibility” than it had in the past when it comes to setting tax policy, there will still be “significant opportunities”.

“There is a significant opportunity given all the disruption that’s out there,” she said.

The EU’s anti-tax avoidance Directive will “absolutely have an impact on Ireland’s tax regime”, given that it will provide for an exit tax and potential CFC rules - “a range of measures we wouldn’t have had the appetite to do previously” Ms Griffin said.

Of mooted measures in the US, such as a significant cut in the corporate tax rate, Ms Griffin said they still “lack detail”.

And, as Simon Carswell, correspondent with The Irish Times queried, if President Trump goes ahead with these planned corporate tax cuts, how is he going to pay for it?

“That is the big question,” he said, adding that if a corporation tax cut does materialise, it’s more likely to be of the order of something in the twenties, rather than the 15 per cent President Trump previously suggested.

If a rate cut does come, Ms Griffin said it’s unlikely to hit current investment and jobs in Ireland; but where it might bite is in terms of future investment in sectors such as life sciences.

On the other front, Ms Griffin noted the threat posed by the UK’s departure from the EU, pointing to the difficulties faced by Irish exporters, as well as the “agressive tax policy the UK may pursue”.

Tom O’Connor, chief executive of Irish IT company Version 1, acknowledged the challenges that Brexit will present to his business but, in a reference to a quote from Daniel O’Connell, he said “England’s difficulty can be Ireland’s opportunity”.

Version 1 recently announced plans for 365 new jobs in Dublin as the business continues to grow. It is targeting a € 20 million uplift in revenues for this year to € 106 million. Some € 35 million of its turnover is generated in the UK and Mr O’Connor was defiant in the face of the challenges presented by Brexit. “Bring it on,” he said.

Ms Griffin had some specific advice.

For Irish companies exporting to the UK, indirect tax could be the “most immediate and significant” impact, she said, while import duties could also be triggered - particularly if a trade deal isn’t reached by 2019.

“It’s now being openly dicussed that the negotiations could collapse before they begin,” said London Editor of The Irish Times, Denis Staunton.

The other very real fear espoused at the event is that once outside the EU, the UK will have more flexibility to shape its own tax policy, and could look to cut its corporation tax rate once more.

However, Ms Griffin noted that there will be some restrictions to the UK agressively chasing FDI.

“It will have to abide by international rules,” she said.

9 Architect showcases refurbishment of its offices on Merrion Square