Unemployment rate in May holds steady on previous month

Some 6.4% of people are unemployed, with the figure for men higher than for women 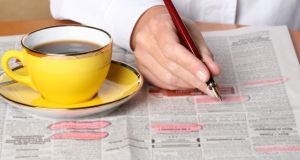 There are 42,800 fewer people unemployed compared with this time last year. Photograph: iStock

The rate of unemployment for May this year was 6.4 per cent, unchanged on the previous month.

The seasonally adjusted unemployment statistics from the Central Statistics Office show that males were still more likely than females to be unemployed, with a rate of 7.1 per cent for males and 5.5 per cent for females. Both groups saw a 0.1 percentage point drop in the level of unemployment on the previous month.

Those figures are an improvement on May 2015, when 10.8 per cent of males were unemployed and 8 per cent of females.

The youth unemployment rate – ages 15-24 – saw a slightly more significant decrease, dropping 0.3 per cent on the previous month to 11.7 per cent.

Compared with this time last year there are 42,800 fewer people unemployed, 1,200 of whom gained employment in the last month.

“Barring an unforeseen economic shock it looks highly likely that the unemployment rate will continue to decline and fall below 6 per cent in the coming months,” said Mariano Mamertino, economist at job site Indeed.

He added that some employers are starting “to feel the pinch of a tighter labour market as they increasingly face challenges filling open roles, with the hospitality and property sectors amongst those where talent is in short supply”.

Neil McDonnell, chief executive of the Irish Small and Medium Enterprises Association, called for the government to focus on the reduction of business costs so that SMEs could employ more people. “Government must understand that unless it is economically viable to hire more staff, SMEs cannot do it.”