How Trump and May have devalued the policy U-turn 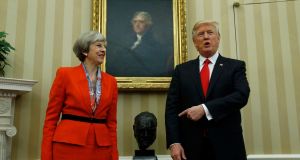 US president Donald Trump points to British prime minister Theresa May: both have changed direction at the first glimpse their policies may not be popular. Photograph: Kevin Lamarque/Reuters

A few weeks ago Donald Trump set a record that I assumed was unassailable; Theresa May has since sailed past it with ease. The leaders of the US and the UK have become so proficient at changing direction that “U-turn” no longer seems adequate. Donald and Theresa are spinning policy doughnuts.

Trump has a notoriously flexible approach to his own pledges. He has reversed course on issues as diverse as whether he will put Hillary Clinton in jail (yes, then no), whether he would force a vote on healthcare reform (yes, then no) and whether it was wise to attack Syria (no, then yes).

Over the past year, May has changed her mind on everything from Brexit to a Bill of rights, energy pricing to nuclear power.

His most dizzying day, in mid April, included U-turns on a bewildering array of substantial policy issues: Nato (“I said it was obsolete; it’s no longer obsolete”), whether China was a currency manipulator, a hiring freeze on federal workers, closing the US Export-Import bank and whether he might reappoint Janet Yellen as head of the Federal Reserve.

It was an impressive record – but surely a record no longer. Over the past year, May has changed her mind on everything from Brexit to a Bill of rights, energy pricing to nuclear power. She reversed a 2015 manifesto commitment, reversed the reversal, and has now taken the unprecedented step of tearing pages out of her own manifesto just days after launching it. She offers a “strong and stable” slogan, a weak and wobbly reality, and a rich seam of irony.

What most concerns me about all this is that Trump and May are tarnishing the very idea of changing one’s mind. U-turns can be valuable, but they already have a poor reputation, reflecting a lazy journalistic trope. The U-turn is a gift to the journalist in a hurry: either the policy was wrong before, or it is wrong now. Little more need be said.

Of course there is something to be said for being consistent. Stubbornness in negotiations is risky but can be an advantage. Foreign policy requires that allies and enemies know where they stand. When politicians promise something to voters, they should make an effort to deliver.

But it is easy to take consistency too far. The most straightforward solution to many a grave policy error is to stop and do something else. This is something the Conservative party would be well advised to do with a damaging limit on immigration that it has promised three times and never come close to delivering.

Discarding what does not work is an essential part of progress in almost any sphere of life. Designers and engineers make prototypes. Programmers debug. Writers edit. Medical researchers use randomised trials to figure out whether a treatment works or is worthless. Evolution works through survival of the fittest. In each case, there’s a way to evaluate and discard what is failing.

Economic growth is built on trial and error, with good ideas spreading and bad ones disappearing.

Economic growth is built on trial and error, with good ideas spreading and bad ones disappearing. Agile businesses reinvent themselves, but often the market does the job for them through the bankruptcy courts.

Policymaking needs the same mechanism, and often lacks it. Because governments can levy taxes, dole out subsidies, and alter the rules of the game, they can do a great deal of good – but they can also prop up bad ideas indefinitely.

This is true even in democracies; in dictatorships, the pet projects of the powerful can squander money almost without limit. The Soviet Union was ruined, in part, by the inability of anybody to criticise and modify failing projects. And China began to move away from poverty when Deng Xiaoping allowed first farmers, then industry managers, to experiment with new ideas and shut down old ones.

For many government policies, it’s important to have an emergency stop to prevent bad ideas getting worse. But Trump and May are like train passengers who hit the emergency stop because they’re having a nice chat on the phone and don’t want to be interrupted by a tunnel. There should be a penalty for misuse - and perhaps there will be.

I have no objection to bad ideas being reversed, but the problem here is that the reversals have been so nakedly political.

A wise policymaker changes course thus: “We had a promising idea, we tried it out on the smallest practical scale, we gathered data, we expanded our pilot programme, and then once the evidence was in, we decided that the idea wasn’t working. We’ve learned a lesson and will stop.”

Such changes of direction are what grown-ups do – and any well-run country should expect to see them regularly. Unfortunately there is no sense that either Trump or May have changed direction on anything because they have been moved by new evidence on whether it works. Instead, they promised what seemed popular, and flinched at the first glimpse that it may not be popular at all.

The rest of us, meanwhile, conclude that politicians are inconstant liars who will say anything to win votes. Where did we get such a preposterous notion?– Copyright The Financial Times Limited 2017