Manufacturing output booms on back of stronger global trade and investment 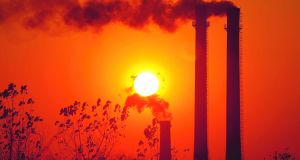 Chinese industrial companies’ debt ratio fell to 56.2 per cent as of the end of April, down 0.6 of a percentage point from a year earlier. Photograph: Sean Yong/Reuters

Chinese industrial profits rose 14 per cent in April from a year earlier as global trade increased. Industrial profits climbed to 572.8 billion yuan (€74.7 billion) last month, the national bureau of statistics said. That compares with a jump of 23.8 per cent in March, and an 8.5 per cent increase last year.

Output in the world’s largest manufacturing nation is booming on the back of stronger global trade and investment, handing producers better pricing power. China’s exporters are capitalising on the improved demand amid concern that the global economy may slow in the longer term.

“In general, industrial profits still maintain good growth,” the bureau said in a separate statement on its website.

Industrial companies’ debt ratio fell to 56.2 per cent as of the end of April, down 0.6 of a percentage point from a year earlier, according to the statement. Industrial profits surged 24.4 per cent to 2.28 trillion yuan in the first four months as 38 of 41 industries achieved better profits than last year, according to the bureau.