Businesses cautious about prospects in light of Brexit and US tax plans, study finds 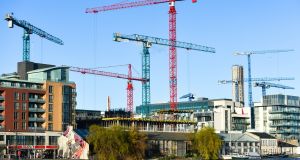 The survey found construction was particularly bullish with almost a third of such businesses planning to hire new workers over the next three months.

More than one in four consumers plan to increase spending over the coming year, but some businesses are cautious about prospects in light of Brexit and US tax plans, a study published on Monday shows.

Bank of Ireland’s Economic Pulse survey, which measures consumer and business sentiment, indicates that both groups had different views of the economic climate in May.

While households were only slightly upbeat about the economy, 27 per cent of them expected to increase spending on shopping trips over the coming year, while 38 per cent were considering buying big-ticket items such as furniture and electrical goods.

Dr Loretta O’Sullivan, group chief economist with Bank of Ireland, noted that two out of three households intended spending the same or more on summer holidays this year as they did in 2016.

“With holidaying at home the preference for some, this bodes well for the tourist industry here,” she said.

The overall pulse index stood at 92.4 in May, down 2.7 points on April, which indicated an overall dip in sentiment.

Businesses had more mixed views than consumers. The services industry was cautious about the future, as the UK election got under way with Brexit talks looming. At the same time, US president Donald Trump announced tax cuts that could hit investment in the Republic.

However, builders, retailers and industrial companies were more positive about the future during May. Construction was particularly bullish with almost a third of such businesses planning to hire new workers over the next three months.

Dr O’Sullivan pointed out that a shortage of labour was an issue for builders, with about a third finding it difficult to get workers.

Builders are also more likely than other businesses to pass increased costs of raw materials on to their customers, with about one in three looking to boost prices in the next three months.

Dr O’Sullivan described businesses sentiment in May as “contrasting”, with builders particularly positive and the services industry less so.

“Sterling was on the agenda for a number of firms this month, as the news flow coming out of the UK and Europe led to some volatility,” she said. “The pound strengthened to 83.5 pence against the euro after prime minster [Theresa] May called a snap election for June 8th, but lost ground again following the outcome of the French presidential election.”

She added that it fell further to 87p against the euro in recent days as the start of the Brexit negotiations loomed.

The survey also shows that four out of five people expect house prices to rise over the coming year, while 70 per cent expect rents to go up.

The survey is based on questions given to 1,000 households, 500 industrial companies, 800 services firms, 500 retailers and 250 builders.

The bank summarises the answers as a balance, which is the difference between positive and negative responses. It calculates the index by combining the balances. Its original value was set at 100 in January 2016 when the bank began the index.