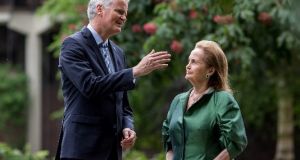 The American Chamber of Commerce Ireland will present Loretta Brennan Glucksman with the Kennedy-Lemass Medal for her “outstanding contribution” to Irish-US relations. Ms Brennan will receive the honour at the chamber’s Independence Day lunch on July 4th.

Ms Brennan Glucksman, and her late husband, Lewis Glucksman, a one-time head of Lehman Brothers, worked to support peace in Northern Ireland and to promote Irish-US links through culture and philanthropy, including establishing the Glucksman Ireland House at New York University.

The chamber announced details of the award on Monday, May 29th, the 100th anniversary of the birth of John Fitzgerald Kennedy. Over 700 people will attend the organisation’s July 4th lunch.

The chamber is the main representative body for US investors in the Republic.

1 Admission of mistake in Oxford vaccine dose raises doubts over reliability
2 Cliff Taylor: Deal or no deal we are now heading for a hard Brexit
3 Karlin Lillington: How I managed to cut my mobile phone bill by at least half
4 Irish Life fund pays €49m for 94 Dalkey apartments
5 Central Bank rules out changes to mortgage rules during pandemic
6 Fiona Reddan: Who’s afraid of Revolut? Not AIB and BOI it seems
7 State may face €1bn in compensation in Covid-19 case, Press Up claims
8 Smarter ways to heat your home: Eight of the best modern systems
9 Lahinch Golf Club runs out of its own cash after €3m Covid-19 hit
10 Pandemic supports will be removed once effective vaccine is rolled out, Government warns
Real news has value SUBSCRIBE