Ministers ditch Davos, the politics of business and the electorate’s short memory 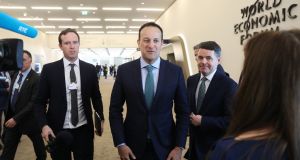 Joe also reports on how Greencore shareholders have been urged by a leading corporate governance advisory firm to vote against the sandwich and prepared meals giant’s pension contribution to its chief executive Patrick Coveney – equating to 35 per cent of his salary.

The Dublin Port company refused to disclose whether a review of substantial credit card spending, including €95,000 on the credit card of the chief executive alone, has been completed. The controversy over spending overshadowed strong year at taxpayer-owned body, writes Peter Hamilton.

EU Commissioner Phil Hogan has warned Britain that negotiations with the United States over a trade deal post-Brexit will be more difficult than expected. “It won’t be as easy as the United Kingdom thinks,” he said in Washington.

Developer Michael O’Flynn dismissed as “blackmail” allegations that his business kept Nama in the dark about elements of a UK land deal, the High Court heard yesterday. Several companies in the O’Flynn group are suing former employees Patrick Cox, Liam Foley, Eoghan Kearney and others saying they made a €12.5 million profit on a student accommodation project on Gardiner Street, Dublin, at the business’s expense.

As Ireland enters what looks likely to be a whirlwind general election campaign, Eoin Burke-Kennedy assesses the key economic issues facing the electorate.

Caveat is also election-themed, with Mark Paul writing that short memories about the cost of past excess mean we are doomed to repeat mistakes, and once more party to bribery with our own money.

In his column, John FitzGerald warns that climate change policy is vulnerable to Northern apathy. He argues that unless there is co-ordinated North-South action, the likely outcome would be growing imports of dirty fossil fuels and the like from the North.