Sluggish Northern Ireland economy a cause for mounting concern 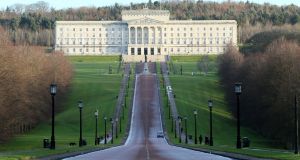 One bright spot on economic horizon concerns the NI public sector where return of the Stormont Executive will ‘help address the logjam in decision making’. File photograph: Getty

Economic activity stalled in the North over the last quarter, contracting by 0.1 per cent, latest government figures reveal.

According to the Northern Ireland Composite Economic Index, published by the North’s Statistics Agency and Department of Finance on Thursday, the North’s economic performance improved by just 0.3 per cent during the year.

The latest economic index sounds a warning bell about where the North’s economy may be headed in 2020 and will be an unwelcome indicator for the new Executive. It is seeking further financial support from the UK government which has committed to “provide a £2 billion (€2.35 billion) injection of financial support” as part of the New Decade, New Approach deal.

But Minister for Finance Conor Murphy has warned that the £2 billion package is insufficient and that the North’s “public services face a shortfall of at least £1 billion next year alone”.

Against this backdrop the review highlights that the Northern Ireland economy remains 3.6 per cent below its 2007 peak when house prices hit a record level.

The latest figures also show that Northern Ireland’s economic performance was dramatically worse than the UK and Republic’s during 2019.

The UK economy grew by 1.1 per cent over the year to the third quarter of 2019, while the Republic’s quarterly national accounts show a 5 per cent increase in gross domestic product over the same period.

“Following five years of annual growth Northern Ireland’s private sector has hit another downturn. It appears the Northern Ireland economy has ended the decade the way it began, 2020 is set to be a challenging year with Brexit remaining a work in progress,” said Mr Ramsey.

“Perhaps the one bright spot concerns the public sector. The return of the Stormont Executive will help address the logjam in decision making that has built up over the last three years. But it is clear, as far as economic growth is concerned, the Northern Ireland economy appears stuck in the crawler lane.”