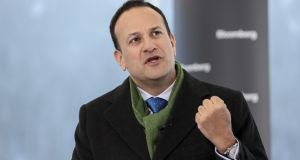 Taoiseach Leo Varadkar during a TV interview on the closing day of the World Economic Forum in Davos, Switzerland, in January 2019. Photograph: Simon Dawson/Bloomberg via Getty Images

Taoiseach Leo Varadkar and Minister for Finance Paschal Donohoe have pulled out of joining the global elite at the World Economic Forum in Davos next week as the Government focuses on campaigning ahead of the election.

Mr Varadkar had been scheduled to host IDA Ireland’s annual dinner for 40-50 international executives and investors in the Alpine village on Thursday evening next week, while Mr Donohoe had been down as an official participant in the forum as of late last week.

The development leaves Ireland without senior Government representation at the world’s biggest networking event for global leaders, business magnates and celebrities since Fine Gael came to power in 2011.

UK media widely reported an anonymous UK government source as saying: “Our focus is on delivering for the people, not champagne with billionaires.”

Taxpayers footed a €19,000 bill as the Taoiseach, Minister for Finance and six aides attended the World Economic Forum last January. This included the €16,065 cost for using the Government jet to get the delegation to and from Switzerland and the expense of hotels rooms in the four-star Sporthotel in the Swiss village.

Mr Varadkar and Mr Donohoe used a series of bilateral meetings with political leaders and panel discussions in the past two years at Davos to defend Ireland’s low-tax economy as the model is coming under increasing threat from planned reforms internationally, and to shore up support across the EU for its position on Brexit.

However, domestic issues such as housing, homelessness, hospital waiting lists and childcare costs have predictably dominated initial campaigning after Mr Varadkar announced on Tuesday that the general election would be held on February 8th.

The Irish Government absence from the 50th World Economic Forum this year comes as EU and UK officials prepare to begin post-Brexit trade talk in earnest next month as Mr Johnson aims to secure a deal by the end of the year.

The EU is insisting that the UK accept a “level playing field” for competition and state-aid rules, labour law, and environmental standards during the upcoming negotiations. However, the UK has ruled out such alignment ahead of the negotiations.

“Brexit was a significant factor in the Taoiseach’s decision to call an election this week. Brexit has been the relentless focus of this Government over the last two and a half years. We have a deal, here will be no hard border, citizens’ rights will be protected, and the Common Travel Area will remain in place,” a Government spokesman said.

“There is now a window of opportunity to hold a general election and to have a new Government in place before the next European Council meeting in March, with a strong mandate to focus on the next phase of negotiations.”

Corporation tax issues are also prominent on the Davos agenda next week at a time when the Organisation for Economic Co-operation and Development (OECD) is leading efforts to set international standards for the taxation of digital services.

US president Donald Trump, whose protectionist views are at odds with the globalist outlook of most Davos attendees, is set to become the headline act again this year, having attended for the first time in January 2018. He cancelled a planned appearance last year due to a government shutdown.

Iran’s foreign minister Javad Zarif withdrew from the event this week, citing the “backdrop of uncertainty in the Middle East”. This averts a possible crossing of paths with Mr Trump and other US officials following a US drone strike that Iranian general Qassem Soleimani this month.

German chancellor Angela Merkel and teenage Swedish environmental campaigner Greta Thunberg are among figures that will make addresses at the forum next week.