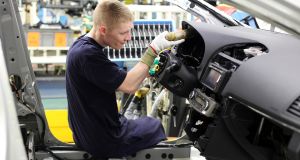 Toyota has two manufacturing facilities in Britain, a vehicle manufacturing plant in Burnaston, Derbyshire and an engine plant in Deeside, Wales. The UK manufacturing operation employs more than 3,800 workers directly.

Britain’s car and aerospace industries have led criticism of UK government plans to split from European regulations after Brexit, warning it will cost “billions” of pounds and damage “UK manufacturing and consumer choice”.

The Society of Motor Manufacturers and Traders issued a statement after Sajid Javid, the chancellor, told the Financial Times that there would “not be alignment” with European Union rules after Britain left the bloc, and that companies would have to “adjust”.

A senior Toyota executive last week warned that any move away from EU standards could put the future of its UK manufacturing operations in jeopardy.

Matt Harrison, executive vice-president of Toyota, told The Irish Times: “All of our lobbying activity and briefing towards the UK government is about protecting one set of standards. It’s extremely difficult for automotive companies to start looking at multiple levels of standards. The scale of opportunity in individual markets is not sufficient to justify that level of complexity.”

Carmakers at present are able to sell cars across the EU and the UK under one certificate. The process, called homologation, involves expensive procedures such as engineering the vehicles to meet emissions standards. Costly crash tests are also required to meet the regulations.

If Britain abandons EU standards and sets its own rules, companies wanting to sell vehicles in the UK are likely to need to obtain a separate certificate to do so, increasing their costs of making vehicles specifically for the British market.

Mr Harrison, who was previously managing director and president of Toyota UK, said: “Remember more than 90 per cent of the production in the UK is going out to other European markets. It would cause us a lot of difficulty if there was some sort of variation.”

“We do need alignment, particularly around the European Union Aviation Safety Agency. We are no different from the automotive industry in that regard. We are looking for alignment on both.”

On Friday Mr Javid told the FT that businesses “have known since 2016 that we are leaving the EU” and said they would be forced to adjust to new rules. – Additional reporting: The Financial Times Limited 2020

1 Eason acquires rival Dubray Books for undisclosed sum
2 Bank leaked my loan request to family who tried to rip me off
3 Solar panels: Are they worth the investment?
4 When the Chemistry no longer works – the closing of a leading Irish ad agency
5 Ryanair and Aer Lingus monitor impact of coronavirus on travel to Italy
6 Fuel company loses €1.3m challenge over tax bill
7 Battery bottleneck stalls electric car sales
8 Mastercard to create 1,200 new jobs by expanding base in Dublin
9 Longview seeks permission for 753 homes in Cork’s outskirts
10 Revolut valued at $5.5bn after latest fundraising
Real news has value SUBSCRIBE