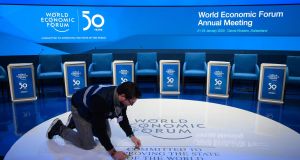 Ireland has the fifth-largest number of billionaires per capita in the world, Oxfam said in a report ahead of the World Economic Forum (WEF) conference in the Swiss ski resort of Davos this week. The report also outlines how women do more than three-quarters of all unpaid care work globally, Oxfam said, adding that this contributes at least $10.8 trillion (€9.7 trillion) a year.

European commissioner for trade Phil Hogan has stepped in to address business leaders attending IDA Ireland’s annual dinner at Davos this week, after ministers pulled out in favour of hitting the hustings. Despite the political no-shows, Joe Brennan is in Davos to cover this week’s event.

In a pre-election manifesto, the employers’ group Ibec says public infrastructure and services had not kept pace with the rapid rise in private sector investment and employment in recent years. Eoin Burke-Kennedy reports.

Britain’s car and aerospace industries have led criticism of UK government plans to split from European regulations after Brexit, warning it will cost “billions” of pounds and damage “UK manufacturing and consumer choice”.

A significant rise in inbreeding in the thoroughbred horse sector poses threats for Ireland’s valuable breeding business, according to a new study. Dominic Coyle has the details.

In his column, Chris Johns warns that Ireland risks a populist culture war breaking out between young and old over property and pensions. Meanwhile Pilita Clark argues that companies that use the eco-excuse to justify cost-savings, do so at their peril and will be easily found out.