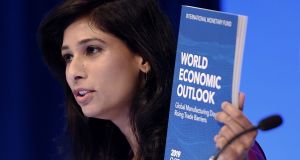 The International Monetary Fund will likely forecast a worse contraction in the global economy than previously estimated for 2020 and sees “profound uncertainty” about the path of recovery, IMF chief economist Gita Gopinath said in a new blog.

Ms Gopinath said the economic crisis triggered by the novel coronavirus pandemic was more global and playing out differently than past crises, with the services sector hit harder than manufacturing in both advanced and emerging market economies, and inflation low across the board.

The IMF is due to update its World Economic Outlook on June 24th. Managing director Kristalina Georgieva last month said the Fund was “very likely” to revise downward its already pessimistic forecast for a 3 per cent contraction in global gross domestic output in 2020, but gave no details.

Ms Gopinath said there were signs of early recovery in many countries that were reopening their economies, but new waves of infections and reimposed lockdown measures still posed risks.

While fiscal policy measures had been sizeable in advanced economies, poor countries had more constrained resources, and the informal sector had not been able to help absorb the shock as it had done in past crises, she said.

Ms Gopinath said pent-up consumer demand could fuel a quicker rebound in hard-hit services, but this was not guaranteed since consumers might change spending behaviour to minimize social interaction, and uncertainty could trigger higher savings rates.

In China, one of the early exiters from lockdown, the recovery of the services sector was lagging, with the hospitality and travel sectors struggling to regain demand.

Ms Gopinath said the longer-term impact on tourism-dependent economies was a particular concern, and governments should pursue policies to reallocate workers from shrinking sectors to those with stronger prospects. – Reuters