Republic slips in global ranking of most competitive economies 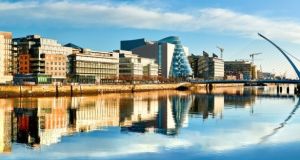 The Republic of Ireland still ranks among the world’s most competitive economies but has dropped out of the top 10 nations.

The survey of 63 countries, compiled by the IMD business school in Lausanne, Switzerland, puts the State in 12th place overall, down from 7th a year ago.

The 2020 edition of the IMD survey, which is widely acknowledged as one of the most reputable barometers of international competitiveness, notes a sharp decline in the Republic’s economic performance, due to lower international investment and high prices.

IMD’s report highlights a number of challenges for the Republic in remaining competitive, including the impact of Covid-19, a risk of an increase in structural unemployment, a global economic recession, an escalation of trade protectionism, and Brexit.

Each country’s ranking is based on an analysis of more than 235 indicators derived from four main factors: economic performance, government efficiency, business efficiency and infrastructure.

Singapore remain in first place overall after leapfrogging the US and Hong Kong last year. The other top five countries are Denmark, Switzerland, the Netherlands and Hong Kong.

A breakdown of the latest figures shows the Republic is ranked in fifth place for business efficiency, in 12th for economic performance, in 13th for government efficiency, and in 23rd for infrastructure.

The Republic’s highest overall position in the prestigious rankings was achieved in 2000 when it was named the fifth most competitive economy globally.

However, it fell to 24th position in 2011, only months after being forced into a bailout programme with the EU and the IMF.

It had generally been steadily rising in the rankings in the years since, coming in sixth in 2017, before slipping to 12th place in 2018 due to Brexit.

Speaking to The Irish Times, IMD chief economist, Prof Christos Cabolis, said overall, the Republic remains a “very competitive nation.” However, he said that infrastructure in particular was an area where improvements needed to be made.