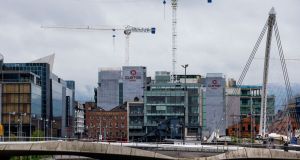 The Central Bank warned on Tuesday that the influx of overseas money into Irish commercial property in recent years, high levels of debt against these assets, and the possibility of more people working remotely over the long term may conspire to hit real estate values as the economy navigates the Covid-19 crisis.

Foreign real estate and private equity firms, mainly from the US, have been behind 60 per cent of commercial property bought in Ireland since 2014, according to the bank, marking a significant shift in a market that had been dominated by domestic investors during the Celtic Tiger years.

About a third of professionally-managed commercial property is housed in so-called Irish Real Estate Funds (Irefs), which are predominantly linked to overseas firms, the Central Bank said in its latest biannual Financial Stability Review, published on Tuesday.

A previous Central Bank report put the total level of assets in Irefs at almost €18 billion at the end of 2018.

“The investment behaviour of such entities will always be affected by market uncertainty,” the new Central Bank report said.

A sudden stop or reversal in foreign investor appetite for CRE (commercial real estate) would have “adverse consequences” on property prices, the banking system, which has €2.4 billion of loans out against such property, and the wider economy.”

In addition, Irish property funds have higher levels of debt than 90 per cent of similar European funds, according to the Central Bank.

While much of the debt is made up of loans from the firms that set up these funds, the leverage level only falls to about 40 per cent of assets when these are stripped out.

“For example, a 15 per cent fall in CRE prices would increase the weighted average loan-to-value across Irefs [excluding shareholder loans] from 43 per cent to 50 per cent,” it said.

“The shock would result in 20 Irefs, with €2 billion in [assets under management] entering negative equity. These shocks could lead to covenant breaches, which may in turn lead to forced property sales.”

The report said while Covid-19 restrictions have had an immediate impact on the value of retail and leisure properties globally, longer term “structural changes in work practices, such as more use of remote working, could lead to lower levels of demand for office space in the future”.