Home repossessions up but still low by international standards 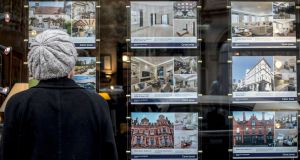 420 owner-occupier homes were repossessed by lenders in the third quarter of 2017, up from 340 in the previous quarter. Photograph: Lauren Hurley/PA Wire

Home repossession rates in the State are rising but remain low relative to expectations at the height of the financial crisis.

The Central Bank’s latest quarterly figures on arrears and repossessions show that 420 owner-occupier homes were repossessed by lenders in the third quarter of 2017, up from 340 in the previous quarter.

Since 2010 a total of 12,295 properties – equivalent to 1.4 per cent of the mortgage stock – have been repossessed by lenders, nowhere near the tsunami of repossessions that had been predicted.

The relatively low repossession rate here reflects the legal impediments faced by lenders and more generally the length of the legal process involved.

The Central Bank figures also showed that the level of mortgage arrears continues to fall in tandem with the upswing in the economy.

Owner-occupier mortgage accounts classified as being in arrears fell 1.7 per cent to 72,489 in the third quarter, marking the 17th consecutive quarter of decline.

Despite the improvement, the figure still represents 10 per cent of all owner-occupier mortgage accounts, which is high by international standards. In the UK it is only 1.5 per cent.

The figures show the level of arrears in all categories of maturity, including more than 720 days’ category, which is viewed as the most problematic, declined during the period.

However, the share in long-term arrears remains large and has increased over time. They now constitute 44 per cent of all accounts in arrears, and 90 per cent of arrears balances outstanding.

For all institutions, the value of accounts in longer-term arrears over 360 days remains large, amounting to just under €8.4 billion, a figure that captures the ongoing and underlying vulnerability of the banking system.

The number of private sector dwelling mortgage accounts that were classified as restructured at the end of September was 119,070.

Of these restructured accounts, 87 per cent were deemed to be meeting the terms of their current restructuring arrangement, up slightly from the previous quarter.

Forbearance techniques operated by lenders include a switch to an interest-only mortgage; a reduction in the payment amount; a temporary deferral of payment; extending the term of the mortgage; and capitalising arrears amounts and related interest.

The figures also include options such as split mortgages and trade-down mortgages.

The figures show buy-to-let mortgage accounts in arrears over 90 days decreased 3.9 per cent during the third quarter of 2017 to stand at 13,591.

Rent receivers were appointed to 390 buy-to-let accounts during third quarter of 2017.

8 Summer tourist season at risk with Covid passports months away