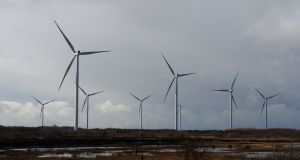 The State’s dividend from some of Ireland’s biggest semi-State companies fell 46 per cent last year on the back of weaker profits and the non-recurrence of a special payment from the ESB.

A review by New Era, the agency that oversees State-controlled businesses including Irish Water, Bord na Móna and ESB, shows that the dividend drawn by the exchequer was €232 million for 2016/17, down from €427 million the previous year.

The report also shows that operating profit at the companies, which between them employ about 12,000 people, dropped by almost 5 per cent to €994 million. That profit dip came amid a “challenging year” for Bord na Móna as a result of a mild winter which affected fuel sales.

ESB, too, faced headwinds, having made foreign exchange transaction losses as a result of weak sterling. The company did not repeat a special dividend of €203 million paid in the previous year, thus reducing the overall dividend received by the State, despite an underlying increase in normal payments.

NewEra, a division of the National Treasury Management Agency (NTMA), provides financial and commercial advice to government departments and ministers in relation to their functions and shareholdings in a number of semi-state companies.

Those companies, according to Ms Fitzpatrick, play a “very significant role in many priority areas of government policy relating to climate change, including bio-energy, carbon sequestration and aspects of transport”.

Ms Fitzpatrick noted the companies invest “substantial capital in critical infrastructure”, adding that €13 billion of investment is required in the water network alone while €4 billion needs to be invested in the regulated energy networks.

The six companies under review, which also include State forestry manager Coillte; national grid operator Eirgrid; and Ervia, owner of both the gas network and Irish Water, invested more than €2.8 billion in 2016/2017.