Wall St objects to elements of US tax reform bill 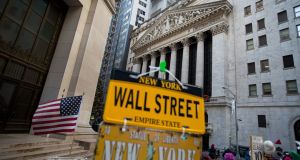 Wall Street executives have begun lobbying against controversial provisions in the Republican tax overhaul bill that would hit high-tax states, arguing they could damage New York’s financial industry by driving out bankers and fund managers.

The measures, which would curb the ability of taxpayers in high-tax states to cut their federal bill by deducting local levies from taxable income, were inserted into legislation by Republican deficit hawks in an effort to limit its hit to US government revenues.

Democrats have cried foul, arguing the provisions unfairly target states that did not vote for Republican Donald Trump in last year’s presidential election; many high-tax states are Democratic strongholds.

However, their opposition has gained unexpected allies in recent days from Wall Street bankers and hedge fund managers, who argue they would be disproportionately hit by the measure. New York and neighbouring New Jersey and Connecticut, where most who work in the US financial industry live, are all relatively high-tax states.

“The biggest threat from this legislation is not to the primacy of New York City as the financial centre of the US and the world,” said Ralph Schlosstein, who co-founded asset manager BlackRock before becoming chief executive of Evercore, the investment bank.

“It is the threat to those in need who benefit from programmes that are supported by the well-off who voluntarily choose to live here and who will experience a 10 per cent or more decline in their after-tax incomes.”

On a trip to New York earlier this month, Mr Trump was buttonholed by several wealthy donors who urged a rethink on the measure, according to people briefed on the meetings.

Reduced deductibility of state and local taxes (Salt), along with a move to cap deductions for property taxes at $10,000, means that some high earners in financial services could be facing an effective tax rate rising from about 50 per cent now to well into the mid-50s.

Salt deductibility is among the most politically fraught of the proposals in a reform plan designed to slash corporation taxes and to partially offset those cuts by eliminating deductions elsewhere.

Both the Senate and the House of Representatives have passed tax bills, and lawmakers will this week continue negotiations to marry the two versions in order to present final legislation for Mr Trump to sign into law before the end of the year.

On Friday, Gary Cohn, the president’s senior economic adviser, suggested the White House might push for a cap on federal deductions for state income taxes, rather than an elimination.

Economists disagree about the effect of personal tax rates on individual decisions on where to live and work, but other states are likely to make a play for high earners if the New York tax burden rises.

Dan Donovan, a Republican congressman whose district serves the Staten Island and south Brooklyn areas of New York City, said he was worried by “mobility” of taxpayers in the top income brackets. “Losing even a small percentage of those households will decimate the state and city tax base,” Mr Donovan said.

Taxpayers in Manhattan take the highest average Salt deductions on their federal tax returns, according to the Internal Revenue Service. Among the top 12 counties in the US, half are in the greater New York metropolitan area.

Ron Kruszewski, chief executive of Stifel, the St Louis, Missouri-based investment bank that owns Keefe, Bruyette & Woods in New York, said passage of the bill could be a “wake-up call” for states to get their budgets in order, to prevent the kind of mass exodus described in Ayn Rand’s book, Atlas Shrugged.

“This is the other side of this; everyone is crying in their soup, but you’ve got to fix that situation,” Mr Kruszewski said.

As written, the plan is “a disaster”, said the head of another powerful New York-based investment bank, who asked not to be named for fear of being attacked by Mr Trump on Twitter.

He added: “This won’t happen over the period of a quarter or a year, but in five to 10 years, when we’ll look back at the amount of intellectual capital lost by New York City and other blue [Democratic-led] states because of Trump’s tax reform, we’ll get the full extent of how damaging all this is.”