Fruits of Nafta deal on the table 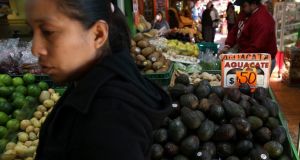 Nafta has not at all been kind to Canada’s automotive industry. Last summer, 625 workers at a major General Motors plant in Ingersoll, southwest Ontario, were let go, their jobs moving to Mexico.

“I don’t know why they are doing this. We are the most efficient [GM plant in North America] and they are making record profits,” a bewildered local union official named Mike Van Boekel said following the announcement last January.

For a month beginning in September, those who had managed to keep their jobs at Ingersoll took to the picket lines following a breakdown in negotiations between unions and GM over improved job security. It was the first time GM workers went on strike in Canada in more than two decades, and illustrates just how vulnerable Nafta’s long-established car manufacturing powerhouses, the United States and Canada, have become.

When the fifth round of Nafta renegotiating talks launched in Mexico City on November 17th, Canadian unions and workers such as Van Boekel were praying that protecting automotive jobs will be front and centre on the list of Canada’s demands.

Canada’s government has said it is committed to working with Mexico to renew Nafta, but officials have also sometimes signalled a willingness to consider a two-way pact of the kind US president Donald Trump prefers.

Trump has threatened to scrap Nafta, if the other two signatories don’t accept proposals that the administration argues will reduce US trade deficits.

Ottawa’s negotiating team is led by Steve Verheul, the man who clinched Canada’s huge trade deal with the European Union earlier this year, and includes a former minister for industry as well as seasoned political strategists.

There’s a lot at stake for Canada. Automotive units and parts make up about 14 per cent of its total exports and are mainly sold to the US.

Today, however, almost a million fewer units – a third of overall production – are being manufactured in Canada than a decade ago. This, in part, has led to its international competitiveness taking a major hit, plunging five places to 10th in last year’s IMD World Competitiveness Ranking.

GM’s flight from Ingersoll is the latest episode in an ever-growing series of moves to have squeezed Canada’s automotive industry, centred on Ontario’s heavily-industrialised southwestern region, in large part because of Nafta.

In 2009, Suzuki walked away from the plant it co-ran with GM in Oshawa, a city 50km northeast of Toronto. An additional worry for Canadian auto workers, particularly those trained to build large SUV models, has been the growing consumer move away from big 4x4s to smaller, more fuel-efficient vehicles better suited to urban driving.

These problems are exacerbated by Ontario’s geographical closeness to the ultra-competitive US market, where cars can be bought more cheaply. Canada’s car makers will try to stem further job losses by focusing on producing high-end models for their greater mark-up, but no one is denying any more that on the whole the balance of power has shifted south to Latin America and east to Asia.

As the giants of 20th-century auto manufacturing continue their fall, one country has caught up. Ford and Toyota have set in motion plans to move engine-building facilities out of Ontario, Michigan and from across the US to Mexico, once the junior member in Nafta’s club of three.

Mexico City is where Nafta is decidedly more popular, and where Trump, who campaigned to have the free trade pact abolished, is not.

Mexico’s auto industry has undoubtedly exploded under Nafta but if a single Mexican product has reached superstar status through the scrapping of tariffs, it’s the avocado.

Mexico’s sales of the fruit to the US and Canada have tripled (4.25 billion and 250 million respectively) over the past decade alone, with little sign of its popularity slowing down.

At the Central de Abasto wholesale food market in southeast Mexico City, avocados are sold by the kilogram for as little as 1.22 (they’re about 80 euro cents each in Dunnes Stores).

This sweltering, chaotic series of covered alleyways, it is claimed, is the largest outdoor market in the world, employing around 90,000 people. Tens of thousands of tonnes worth of food is trucked in and out, sold and unsold here every day – enough to feed four-fifths of Mexico City’s 20 million population.

Vendors working among the stack upon stack of impeccably clean onions, potatoes and fruit have a pretty good sense of the benefits Nafta has wrought, and how seriously President Trump should be taken.

“These avocados go to Canada, Michigan state, up north,” says Teo Guzman, who is sitting behind mounts of the black-ripe fruit. “A kilo of ripened avocados is 27 pesos [less than $1.50], but in the States they pay $20,” he says, with no little bewilderment.

Guzman said he’d have to wait to see if Trump’s firebrand rhetoric – “He’s a bad man because of how he talks,” he says – will damage the Mexican economy.

He says he’s not up to speed on the latest trade negotiations. “I think Nafta is good; open trade is good.”

For Mexican importers, Nafta has proved beneficial, too. “We could have only ever opened this business because of Nafta,” says sales manager Axel Romero, who oversees the importing of 1.5 million boxes of apples, table grapes and pears from California, Washington state and Michigan through a company called Vidimport. “For the fresh-fruit industry, it’s been great.”

Kilkenny-headquartered food giant Glanbia is another sending goods from the US south to Mexico, in the form of dairy produce and performance nutrition products. “Glanbia welcomes efforts to make trade between countries easier and more transparent [and] the opportunity to modernise aspects of what is a 20-year-old agreement,” a spokesperson said of the ongoing renegotiations.

Today, with exports worth a billion dollars a day, Mexico has risen to become the world’s 13th biggest economy. “Nafta transformed the face of the Mexican economy,” says Luz Maria de la Mora, an expert and former undersecretary for economic relations and international co-operation at Mexico’s ministry for foreign affairs. “It created a number of institutions that defined a liberal economic policy.”

Among the better-known beneficiaries of Nafta are the tens of thousands of Mexicans who found jobs in maquiladora or factories that sprung up along the US-Mexico border including around Ciudad Juarez, a hardscrabble, violent city across the border from El Paso in Texas.

Firms such as Bosch, Lexmark and Foxconn have opened factories in Juarez to avail of the cheap Mexican labour and proximity to the lucrative US market. Delphi, a supplier of automotive technology, moved thousands of jobs there from Ohio a decade ago.

Doing so devastated the latter’s local community, but allowed poor Mexicans from the country’s rural southern states to move north to meet the demand for manufacturing positions. That lifted tens of thousands of families out of poverty.

But Nafta has also left swathes of the Mexican economy no better off. In fact, for some agriculture producers it has been disastrous. Crops such as corn, an important food source that originated in present-day southern Mexico more than 10,000 years ago, has been hit hard by Nafta’s free-trade policies.

Once a net exporter of corn, today Mexico imports millions of tonnes from the US, whose massive industrial-scale farms have crippled a product that was once a cornerstone of Mexico’s gastronomic identity.

“Nafta is only a trade agreement, not Mexico’s development policy,” argues de la Mora. “We cannot expect that Nafta is going to solve problems of development and poverty in Mexico.”

Trump’s antagonistic rhetoric towards Mexicans prompted one Mexican senator to threaten to drastically cut the amount of corn Mexico imports from the US. Curiously, Trump continues to assail the pact though it has allowed US farmers to sell billions of dollars of agriculture products to Mexico.

What president Trump and other Nafta critics fail to note is that whether the accord continues in its current form or not, the US and Canada would lose manufacturing jobs regardless: Look, for example, at the more than two million jobs that have migrated to China and east Asia since 2000.

A point frequently made by those on the trade front-lines in Canada and Mexico is that Nafta, whether they support it or not, is a living entity that’s deeply intertwined across borders: it is not unusual for food and industrial products to have crossed between Canada, the US and Mexico several times before being fully manufactured and ready for market.

The fact that trade between Canada and Mexico has doubled since Nafta came into force, and unemployment in the former is less now than in 1994, shows that regardless of whether the US chooses to continue as the dominant trading partner within the pact, the agreement has contributed significantly to economic growth.

The end of the US and Canada’s manufacturing supremacy has been apparent for some time, and no matter how he spins it, Trump’s promises can do little to change that.

1 Corona beer firm reeling after 8% slide due to coronavirus
2 Bank leaked my loan request to family who tried to rip me off
3 Irish companies restrict travel over coronavirus fears
4 Life as a Facebook moderator: ‘People are awful. This is what my job has taught me’
5 Suspicions rife as key Brexit trade talks begin in Brussels
6 Artificial intelligence may be more humane than people
7 We have little chance of building enough homes to meet election promises
8 Coronavirus: Iseq down 11% in five days as global sell-off is worst week since 2008 crisis
9 Digicel plots network-sharing deal amid ‘tight’ cash levels
10 Rolls-Royce surges on hopes of solution to Boeing 787 engine glitches
Real news has value SUBSCRIBE