President cites it as proof of ‘strong and enduring’ bilateral relationship 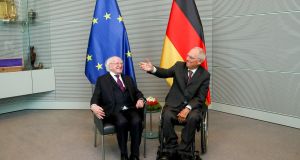 President Micahel D Higgins meets with the president of the Bundestag Wolfgang Schaüble .

President Michael D Higgins has welcomed a bounce in Irish-German trade ties as proof of a “strong and enduring” bilateral relationship.

At the start of a three-day state visit to Germany, Mr Higgins paid tribute to Irish companies that have made Germany become our third largest export market, worth €23 billion annually.

Mr Higgins told a business audience in Berlin he was confident Irish industry – and the German-Irish relationship – will weather the uncertainties of Brexit and a growing wave of protectionism.

“Irish industry has continually shown itself to be adaptable and innovative in the face of change and uncertainty and I have every confidence that Irish companies will face this new challenge with their customary strength and determination,” he said.

When the then Irish Trade Office opened its German office 1962, exports were worth €7.6 million mostly in livestock and sewing machines. Today’s exports are three times that and include mobile communications, medical equipment and pharmaceuticals.

Enterprise Ireland has 600 companies selling over €1 billion of goods and service into the German market, up six per cent last year and up a fifth in two years.

The state agency is in the middle of a push to reduce dependency on the UK and boost by 50 per cent eurozone and international exports by 2020.

The agency’s client companies’ euro zone exports increased by 8 per cent in 2018 to €4.8 billion, the second-largest market after the UK.

“Irish companies are achieving international sales at record levels, driving innovation and bringing the Irish advantage to a wide range of sectors,” she said. “These record results are a testament to the resilience of Irish companies in the context of Brexit.”

“After proving ourselves with Audi, business has grown quickly, revenue has grown quickly and we have upped our game enormously as a result,” said Mr Gerry McQuaid, executive vice president commercial of Cubic Telecom.

The agency also announced a partnership with Berlin’s ESMT international business school to accelerate the number of Irish companies entering new markets in the eurozone. The pilot programme, designed to scale over four years, will include 20 clients initially.

Earlier, at a lunch hosted by Bord Bia, Mr Higgins praised the state food and drink agency’s efforts to push Irish exports to Germany: up 28 per cent in four years to €730 million annually.

“It really shows the appreciation that the German people have for quality, national product and sustainability of Irish food,” he said.