Latest figures show tax revenue for the year to date has risen by nearly €1.7bn 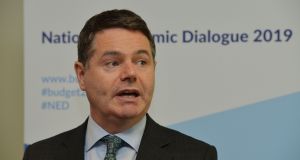 Minister for Finance and Public Expenditure and Reform, Paschal Donohoe: the Government is on course for another record tax take this year, according to the latest exchequer returns. Photograph: Alan Betson

The Government is on course for another record tax take this year with the latest exchequer returns showing strong year-on-year increases in all four main tax heads.

The figures, published by the Department of Finance, show the Government collected €26.7 billion in taxes in the six months to the end of June, up nearly 7 per cent or €1.7 billion up on last year.

The strong performance is a reflection of the continued growth in employment and activity across the economy and comes despite the uncertainty of Brexit. The figures are likely to give Minister for Finance Paschal Donohoe greater scope spending and tax changes in the upcoming budget.

Income tax, which accounts for about 40 per cent of the Government’s tax base, generated just under €10.5 billion, up 7.7 per cent on last year.

Corporation tax was also a strong performer, generating €4.2 billion for the six-month period, up 3.5 per cent on last year.

Business tax receipts have been running behind target so far this year but stronger-than-expected figures for June, a key month for corporate tax collections, suggests they may soon exceed expectations.

The Government has been repeatedly warned not to use the current surge in corporate tax receipts to fund permanent day-to-day spending measures because of its inherent volatility and because such a large proportion of revenue comes from just a handful of large firms.

VAT, a key indicator of consumer spending, was weaker than expected, generating €7.6 billion, which was 2 per cent below what had been expected. However revenue from the sales tax was still up 5 per cent year on year.

The public coffers were also boosted by excise duty, which was behind target for most of last year due to the introduction of plain packaging for tobacco products, but has exceeded expectations in 2019. It came in at just under €2.9 billion for the six-month period, nearly 5 per cent above profile.

The figures delivered an exchequer surplus of €260 million for June, compared to a deficit of €823 million at the same point last year.

The department said the year-on-year improvement was driven by increases across all revenue streams – tax, non-tax and capital receipts – and somewhat offset by increases in both current and capital expenditure.

On the spending side, total voted expenditure amounted to just over €25 billion, up 6 per cent in year-on-year terms but €312 million behind what the department had projected.

Health spending, a perennial concern for Government, was €8.4 billion for the six months but still within budget despite reports of a significant overspend in May.

“This fiscal out-turn provides a good platform for the remainder of the year. However, we remain vigilant to the potential challenges we face including Brexit,” Mr Donohoe said.

Peter Vale, tax partner with Grant Thornton Ireland, said the sustainability of Ireland’s corporate tax base remains an issue due to changes coming down the tracks as to how corporate tax profits are distributed.

“Broadly, the changes could dilute the attractiveness of our low corporate tax rate as a portion of existing profits would be diverted to market jurisdictions,” he said.