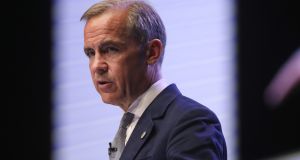 Mark Carney, governor of the Bank of England and Irish passport holder.

Bank of England Governor Mark Carney is the favourite to replace Christine Lagarde as managing director of the International Monetary Fund, according to an online oddsmaker.

The Canadian, due to leave the Bank of England in January, is placed at seven-to-two to take the IMF job, according to Betway.

Ms Lagarde was this week nominated as president of the European Central Bank, and is due to take up the role when Mario Draghi leaves on October 31st. “Though he was born in Canada, Carney meets the criteria by holding an Irish passport and having British citizenship, while his expected departure from the Bank of England in January looks well-timed,” said Betway’s Alan Alger.

Former Reserve Bank of India governor Raghuram Rajan, also considered as one of the frontrunners to replace Carney, is the second favorite at nine-to-two, while former UK chancellor of the exchequer George Osborne and ex-Federal Reserve chair Janet Yellen are both seen as 25-to-1 outsiders.