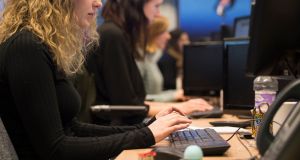 Services sector, which covers businesses from banks to hotels, accounted for 51% of all enterprises. Photograph: Lauren Hurley/PA

There were more than 271,000 business enterprises operating in Ireland in 2017, the highest level on record, according to new figures from the Central Statistics Office (CSO).

This was 8.5 per cent higher than the 250,033 enterprises that existed the previous year.

The CSO’s business demography series provides a breakdown of the number of active enterprises, newly established and recently defunct, operating in the State.

The 271,000 businesses operating in 2017 employed about 1.55 million people, also the highest level on record. The services sector, which covers a myriad of businesses from banks to hotels, accounted for over half (51 per cent) of all enterprises that year, the figures show.

The construction sector accounted for just over a fifth (21.1 per cent). However, when it came to employment, construction showed the biggest percentage rise in persons engaged over the five years between 2013 and 2017 at 50 per cent; with services (24.5 per cent) and industry (20.9 per cent) also showing growth of over 20 per cent .

Small and medium-sized enterprises accounted for 99.8 per cent of the total Irish enterprise population for 2017.

“Enterprise death” figures for 2016 are estimated as an enterprise needs two full years of inactivity before being declared a final death, the CSO said. The number of enterprise deaths decreased across all sectors in 2016 with services sector accounting for the highest number.