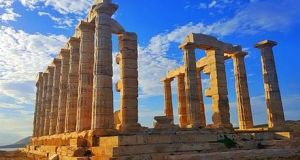 The IMF has warned that Greece’s debts remain unsustainable, with a debt-to-GDP ratio of some 180%. Photograph: Getty Images

Greece is about to launch itself back on private borrowing markets, selling a five-year bond to replace existing debt. It is an important symbolic move, the first time Greece will have raised private debt since 2014, and a sign that the country has come a long way since it almost crashed out of the euro zone in summer 2015.

The Syriza government will be positioning it as a signal that Greece can make a clean break with the EU/IMF bailout when the current programme – its third – runs out at the end of July 2018. However, there is a long road to travel before this happens.

Greece’s bond move will probably be successful, but remember it is being underpinned by remarkable conditions on world bond markets. Around one-third of the debt of developed countries and half of euro zone debt is trading at a negative yield, according to a recent analysis by Citi. That means investors are effectively paying governments to borrow the debt involved.

Against this backdrop, Greek five-year debt, which will probably yield around 4.75 per cent, looks attractive to the investors being offered it provided you believe that the country will not be hit for another private debt restructuring.

Also, Greece has just got more bailout cash from the EU after passing the second review in its latest programme, and the IMF has conditionally agreed to release additional cash, though only on the basis that euro zone governments agree further debt relief.

Greece is also hitting the markets before the ECB makes clear its plan to start withdrawing monetary stimulus, which could unsettle markets in the autumn.

But even if Greece is successful this time, doubts remain. The IMF has warned that its debts remain unsustainable, with a debt-to-GDP ratio of some 180 per cent, though most of this is now owed to official lenders.

Euro zone governments have yet to agree a way to make this more sustainable even though much of it is now long-dated debt at relatively low interest rates.

The old issue remains – the big EU countries want to end the bailouts but baulk at the kind of fundamental debt writeoffs or restructuring that would help this to happen.