If resources are an issue, why does the ODCE hand back half its budget? 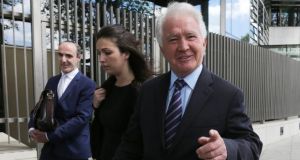 The Office of the Director of Corporate Enforcement (ODCE) has been in the public and political firing line ever since a criminal case against former Anglo Irish Bank chairman, Seán FitzPatrick, collapsed in May.

It is now widely accepted, including by the ODCE itself, that the State’s corporate watchdog botched aspects of its investigation into FitzPatrick. Documents were shredded and concerns were raised over the manner in which the ODCE took witness statements from staff at EY, Anglo’s auditor.

There has long been an a suggestion that the ODCE has struggled for resources to maintain a number of simultaneous high-profile investigations. Yet the ODCE’s annual report, released on Monday, reveals that the watchdog hands back almost half of its budget each year to the State.

If resources are such a struggle, why doesn’t it simply spend that money to staff up?

The Government allocated just over €5 million to the ODCE last year, just below the amount allocated the previous year. Salaries were down by just over 7 per cent, to a smidgen above €2 million.

Most of the office’s other expenses have remained constant over the last three years, although the amount spent on outside consultants last year, at €50,000, was barely a fifth of the amount spent in 2015.

In total, the ODCE has returned about €6 million to the State over the last three years, including €2.2 million last year.

Imagine how much outside expertise that could buy the State’s corporate watchdog? The considerable expertise of myriad forensic accountants, private investigators and other experts is available for purchase from firms such as Kroll and others.

There has been a suggestion from the ODCE that the money has been held back to cover the possibility of potential court case cost awards against the watchdog. But surely its primary function – the investigation and prosecution of corporate wrongdoing – should take precedence?

It is not as if white-collar crime is so successfully investigated and prosecuted in Ireland that half of the exchequer budget allocated for this purpose can be simply returned, as if it wasn’t needed.