Greece hires banks as it prepares for market return 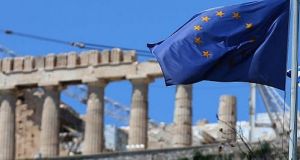 The left-wing Syriza government in Athens has eyed a return to the debt markets to underscore its economic rehabilitation. Photograph: Getty Images

Greece has hired six banks to manage its return to the international bond markets after three years as it seeks to tap investor appetite for its debt after it was bought to the brink of a euro zone exit in 2015.

Goldman Sachs, Citi, Deutsche Bank, HSBC, BNP Paribas and Bank of America Merrill Lynch will manage the deal to issue a five-year bond maturing in 2022 – Greece’s first since 2014. The new debt is due to launch Tuesday.

Athens’ left-wing Syriza government has eyed a return to the debt markets to underscore its economic rehabilitation after it stood on the cusp of crashing out of the euro zone in 2015.

The government has managed to secure its latest tranche of bailout cash, and is looking to slowly build up its cash buffers ahead of the expiration of its current rescue programme in August 2018.

On Friday S&P ratings upgraded its outlook on Greek government debt from stable to “positive” on the back of hopes the country will receive further debt relief from its EU creditors.

Fresh doubts over the bond issuance were raised in recent weeks amid reports that Greece had breached a debt ceiling of around €320 billion set on Athens by the International Monetary Fund (IMF).

Yet Greece is ploughing ahead with its bond market return, looking to refinance an existing five-year bond at a lower interest rate. In a statement to the stock exchange on Monday, Greece’s debt office said it would ask holders of its 2019 bonds issued three years ago to exchange their debt for cash. The bond will price on Tuesday.

Yields on the bond, which move inversely to prices, spiked to as high as 35 per cent two years ago as the Syriza government tussled with its euro zone creditors over its future in the euro zone. The bond has since rallied to a record low of 3.2 per cent on Monday.

Should the bond issue attract strong investor appetite, “it will strengthen those in Syriza who feel a clean exit from the bailout is plausible next year”, said Mujtaba Rahman at Eurasia group. – Copyright The Financial Times Limited 2017