While the EU negotiators each sat with a stack of briefing papers in front of them, the UK delegation had none 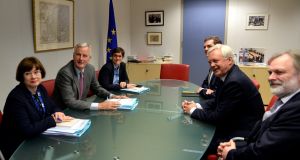 David Davis, the UK’s Brexit minister, took a break from cabinet infighting on Monday to make a lightning trip to Brussels, albeit one mainly notable for an awkward photo opportunity.

After his arrival at the EU’s headquarters on Monday morning, the European Commission released pictures of Mr Davis sitting opposite his EU counterpart, Michel Barnier, with their respective teams. The meeting marked the start of the second round of talks over the UK’s departure from the EU.

While the EU Commission negotiators each sat with a stack of briefing papers in front of them, the UK delegation had none, leading to speculation on Twitter as to whether they had actually brought any. British diplomats said the documents were still in Mr Davis’s bag at the time the photo was taken.

At a brief press conference with Mr Barnier earlier in the morning, the Brexit secretary said that this week’s talks would delve “into the substance of the matter,” include discussions on Britain’s EU exit bill and citizens rights.

The two sides are planning for four days of negotiations with Mr Davis returning to Brussels on Thursday to take stock of progress and make preparations for the next round of talks.

The UK minister left Brussels at around midday Brussels time, three hours after he arrived at the commission, with technical work to continue this afternoon in his absence.

Mr Davis headed back to London as tensions mount within the government over Brexit, pitting chancellor Philip Hammond against hardline Brexiters.

The upheaval has even sparked concerns in Brussels. “It’s a mess. Nobody would want to see them like this,” said one European diplomat handling Brexit.

While Mr Barnier will hold a press conference at the close of talks on Thursday, Mr Davis’ team has yet to confirm whether the minister will join him.