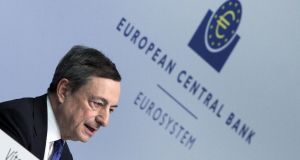 Mario Draghi: his statements last year that a recovery was on the way were widely dismissed as wishful thinking

The recovery in the euro zone economy is now a key theme for 2017. Pretty much everyone missed the start of this. The euro zone economy has been in the slow-growth mire for so long that statements from ECB president Mario Draghi (inset) last year that a recovery was on the way were widely dismissed as wishful thinking. Even when it became clear that German growth was strengthening, doubts persisted.

Now, however, the evidence is of growth. Yesterday the March reading for the euro zone purchasing managers’ index – a gauge to the buying intentions of business and thus to future growth – rose to 56.7 from 56.0 in February. This was its highest reading since April 2011, and better than market analysts had expected, with strong momentum in particular for France and Germany.

With a reading above 50 indicating expansion, Chris Williamson, chief business economist at IHS Markit, who compile the survey, said the euro zone economy was now “firing on all cylinders”.

The ECB governing council may take a cautious view of this, of course. Growth did look to pick up in early 2011 – prompting two rate increases from the central bank , a move later seen as a disastrous error. Now, while the headline rate of inflation has already reached the 2 per cent target level, the underlying rate – excluding volatile items such as energy costs – is lower.

Meanwhile, the French election looms, and a victory for Marine Le Pen, with her agenda of taking France out of the euro, would mean that all bets are off.

Yet the indicators are positive. Average forecasts for quarterly growth in the January-March period had been for around 0.4 per cent. Now most expect a rise of 0.5 or even 0.6 per cent.

The figures show evidence of increasing pricing power for businesses, which may start to feed through to inflation.

One big question is the impact of all this on the interest rate cycle. Expectations had been that the ECB would phase out its quantitative easing programme through 2018, and move to increase interest rates in 2019. The more the figures point to growth, the greater the speculation that the first rate rise will instead take place in 2018.