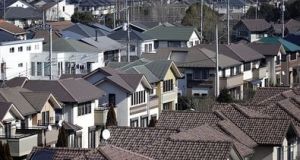 The ESRI predicts the level of home building will rise to the Government’s target level of 25,000 units per year by next year.

The Economic and Social Research Institute (ESRI) used its latest outlook report to highlight what may prove a bigger challenge for the Irish economy than Brexit or Trump’s protectionist stance on trade, namely “the disproportionate influence of construction”.

The State’s recalcitrant housing market is now the main driving force behind domestic economic activity, fuelling increased levels of consumption (via rising rents) and investment (via house and office building).

Job creation in the sector is also accelerating a likely return to full employment by the end of 2018, two years ahead of expected.

This would normally be something to cheer about, but as the ESRI noted, imbalances in construction were significant factors in the lead-up to the crash.

The rapid deterioration in competitiveness in the 2000s was directly related to higher wages and prices in the construction sector, it said.

Of course, most will point to the fact that there was also a credit boom facilitated by a rogue banking sector, which is now muzzled and largely under State control.

Nonetheless, the ESRI warns the disparity between demand and supply in the housing market, the acceleration in employment combined with rising property prices and rents are all likely to distort economic activity here.

In its report, the institute predicts the level of home building will rise to the Government’s target level of 25,000 units per year by next year, which begs two simple questions.

If the banking sector is still convalescing, who is paying for the current construction boom and who will supply the mortgages for the next round of buying?

It’s obvious that much of the current construction is being funded by outside equity interests rather than the domestic banks.

However, the second question is harder to answer, not least because it hasn’t happened yet and this time around bank lending will be pegged closer to deposits, while the current restrictions on borrowing are formidable.

The ESRI had no real answer as to how this circle could be squared other than to speculate that an upswing in lending might be facilitated by new entrants into the market.

Alternatively, it said new financial products might emerge, albeit without mentioning the 100 per cent mortgage product, famously peddled on the Irish market by Bank of Scotland/Halifax. Surely we can’t be back there again.