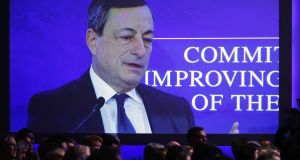 An electronic screen displays Mario Draghi, president of the European Central Bank (ECB), as he speaks during a panel session at the World Economic Forum (WEF) in Davos, Switzerland. Photographer: Matthew Lloyd/Bloomberg

Private-sector growth in the euro area slowed to the weakest in almost a year as volatility in financial markets highlighted risks to economic growth, Markit Economics said.

A purchasing managers’ index for manufacturing and services fell to 53.5 from 54.3 in December, the London-based company said. That’s the lowest level since February.

A reading above 50 indicates expansion. With a cooling Chinese economy sending global markets tumbling and exacerbating an oil crash that is damping consumer- price gains, the European Central Bank is considering more stimulus as early as March.

A year after announcing an unprecedented quantitative-easing plan, and a month after extending that program while making the deposit rate more negative, president Mario Draghi is still struggling to lift inflation in the region much above zero.

“The cooling in the pace of growth in euro-area business activity at the start of 2016 is a disappointment but not surprising given the uncertainty caused by the financial-market volatility seen so far this year,” said Chris Williamson, chief economist at Markit. Yet, “it would be wrong to get too worried.”

The PMI still points to growth of 0.3 per cent to 0.4 per cent at the start of the year, he said. Willing to Act Draghi told an audience at the World Economic Forum in Davos, Switzerland, on Friday that the ECB has “plenty of instruments” to raise inflation. “We have the determination, and the willingness and the capacity of the Governing Council to act and deploy these instruments,” he said.

Professional forecasters see inflation averaging 1.6 per cent in 2018, according to an ECB survey published on Friday. That’s the level that the Frankfurt-based central bank less than two months ago projected would be reached by 2017. Markit said a continued increase in new orders in both manufacturing and services boosted backlogs of uncompleted work to the highest in about four-and-a-half years, prompting firms to hire more staff. “With plenty of orders in hand to work through, hiring remained encouragingly resilient at the start of the year,” Mr Williamson said.

Lower oil prices “will also help boost sales, especially as the fall in households’ fuel bills should free up more income to spend on other goods and services.” A composite PMI for France climbed to 50.5 in January from 50.1, Markit said. A measure for Germany fell to 54.5 from 55.5, the lowest in three months.