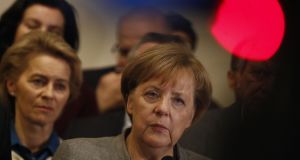 China’s Shanghai Composite Index recovered from the biggest drop since August. There was a broad resumption of losses in Asia from the end of last week, when the region’s equities showed signs of fatigue after a stellar year so far. In the Treasury market, the gap between two- and 10-year Treasury yields again hit the tightest level in a decade, adding to concern about the pace of future economic growth. Bitcoin climbed to a fresh high, topping $8,000.

The late rally in China came as markets took a closer look at the plans to curb risks in the country’s $15 trillion of asset-management products. The move was a follow-through from last month’s Communist Party’s twice-a-decade leadership congress, where President Xi Jinping reiterated that controlling financial dangers was a priority. “Some people may have come to realise that the new rules are not much different from what authorities had been doing to cut risks,” said Dai Ming, a Shanghai-based fund manager with Hengsheng Asset Management Co.

While the German political impasse triggered an immediate slide in the euro, it occurs against the backdrop of a European economy growing strongly enough that the European Central Bank is scaling back its stimulus. Just Friday, European Central Bank President Mario Draghi helped boost the euro past $1.18 with comments predicting that European wage gains will pick up. The euro came off its lows of the session as Asian trading progressed.

“The news is negative for the euro, but its longer-term implications are not clear yet,” said Mansoor Mohi-uddin, head of currency strategy in Singapore at NatWest Markets, a unit of Royal Bank of Scotland Group Plc.

The tilt away from stocks globally comes as investors try to gauge whether there are sufficient drivers to continue the march to historic highs. Strong earnings and solid global growth are balanced against lofty valuations in some markets, and the negative signal from the US yield curve -- where longer-dated Treasuries are yielding less of a premium over shorter-dated ones.

After last week’s retreat, the MSCI Asia Pacific Index is at risk of forming a “double-top” technical pattern, often associated with further declines. Volumes may be lower than average this week due to the Thanksgiving holiday in the US.