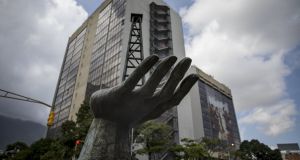 Russia has come to the aid of Venezuela with a deal to restructure $3.15 billion (€2.7 billion) of sovereign debt, allowing Caracas to meet obligations to other creditors and underlining Moscow’s role as the crisis-hit country’s main foreign backer.

Rating agencies this week declared Venezuela in default on several of its international bonds, worth more than $60 billion in total. The country has said it will have to restructure the debt as part of what is set to be one of the largest sovereign defaults in history.

“Venezuela is advancing towards the recomposition of its external debt, to the benefit of its people,” Simon Zerpa, Venezuela’s economy minister, said from Moscow.

The intervention by Moscow allowed Venezuela to sidestep major western creditors, and analysts said the country was emerging as a “test case” for sovereign defaults, which are normally handled through a group of postwar institutions such as the International Monetary Fund and the Paris Club.

Both Russia, which is a member of the Paris Club of international creditors, and China, which is not, are emerging as alternate venues for embattled countries seeking to avoid debt restructuring managed by traditional economic powers such as the US and western Europe.

“There is now the possibility of a lot of bilateral sovereign and quasi-sovereign [credit] exposure that is not being transparently reported,” said Douglas Rediker, a former US representative on the IMF board. “No longer do you have the certainty that the Paris Club is going to reflect [the positions of] the vast majority of creditors”.

Moscow has provided billions of dollars to Venezuela in recent years through sovereign debt purchases and cash advances to PDVSA, the state-owned oil company, from the Kremlin-controlled Rosneft.

Russia said on Wednesday it had agreed to restructure the $3.15 billion of debt by allowing Venezuela to repay it over a 10-year period, with “minimal repayments” in the first six years, freeing up cash to meet other near-term debt payments.

“Debt relief provided to the republic [of Venezuela] as a result of this debt restructuring will allow it to allocate funds for the development of the country’s economy, improve the debtor’s solvency and increase the chances of all creditors to return loans previously granted,” Russia’s foreign ministry said in a statement.

Wilmar Castro Soteldo, Venezuela’s agriculture minister, who flew to Moscow to sign the deal, said the agreement covers bilateral government obligations only and does not relate to money owed to Rosneft by PDVSA.

Mr Soteldo said the deal would facilitate increased trade ties with Russia, describing the agreement as a “financial and political decision of strategic importance”.

Rosneft, which has loaned PDVSA about $6 billion in payments guaranteed by oil supplies and a 49.9 per cent stake in Citgo, the Venezuelan oil company’s US subsidiary, said on Tuesday it had received “several hundred million dollars” in repayments that were being serviced on schedule. It added that it did not at present plan to provide the country with any more financial support.

On Monday Caracas missed a deadline to pay $200 million in interest on two of its government bonds, prompting S&P Global, the rating agency, to formally declare it in default.

The oil-rich nation, which was hit hard by the 2014 collapse in energy prices, is overdue on $420 million of further interest payments on other sovereign bonds, as well as payments on debt issued by PDVSA.

Nicolás Maduro, Venezuela’s president, announced two weeks ago that the country would have to “refinance and restructure” its foreign debts. But the first meeting with international investors offered few details on how the country would seek to tackle the crisis.

Socialist Venezuela is already under EU-imposed sanctions for human rights abuses, while some officials are under a number of US sanctions. Some countries have called for restrictions to be increased to include travel bans for some members of the administration and the freezing of assets, as well as an embargo on oil exports to the US. – Copyright The Financial Times Limited 2017